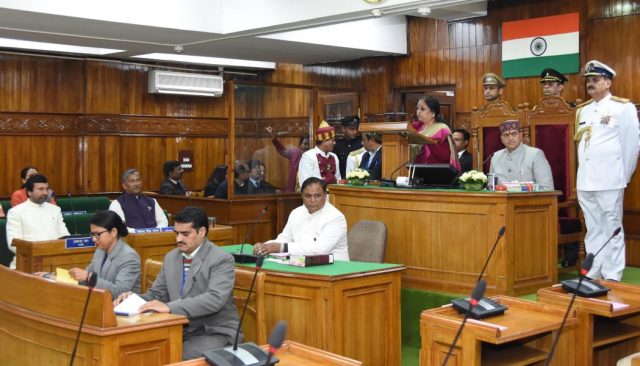 By Arun Pratap Singh
DEHRADUN, 11 Feb: There was uproar in the Uttarakhand Assembly during the Governor’s address to the state assembly on the first day of the budget session over the hooch tragedy in the state with Congress members demanding dismissal of the state government. In view of the recent tragedy related to deaths of a large number of persons due to consumption of illicit liquor, it was expected that the Opposition would stage a strong protest and not let Governor’s address continue unobstructed. Holding the government responsible for the deaths, Congress members not only rushed to the Well of the House displaying placards demanding dismissal of the Excise Minister, but also demanded the government quit over the tragedy.
However, not taking cognisance of the Congress members standing and shouting slogans in the Well of the House, Governor Baby Rani Maurya continued to read out her address even as they continued to protest. Besides this issue over which their protest was apparently pre-planned, the Congress members also were “annoyed” with the start of the Governor’s address before the ‘scheduled time’ of 11 a.m.
Incidentally, due to some miscalculation regarding the time, Governor Baby Rani Maurya arrived in the Assembly a few minutes earlier than the stipulated time of 11 a.m. The CM, the Speaker and the Parliamentary Affairs Minister had to rush to welcome her and lead her to the House. As a result, Maurya began her address about five minutes before 11 a.m. when the House was half empty and members were just coming in. As soon as her address began, some of the Congress members who were already present in the House rushed to the Well with the placards and started shouting slogans. They were demanding resignation of the government over the hooch tragedy and also dismissal of the Excise Minister. However, when Leader of the Opposition Indira Hridayesh came into the House, she appeared to be visibly upset that the address of the Governor was already on! Standing in her designated place, she lodged a strong protest at the occurrence and termed this incident an insult not only to the House and the State Assembly, but also to the Opposition. She claimed that such an incident was unprecedented in the history of parliamentary democracy and alleged it was a result of some conspiracy by the government. State Congress Chief Pritam Singh who reached after her also protested before time start of the address of the Governor. However, the other Congress members continued to protest against the hooch tragedy and demand dismissal of the government by the Governor!
However, Governor Maurya continued her address, and the Congress members staged a walk out in protest over both the issues! When the Governor completed her address, the session was adjourned till 3 p.m.
At 3 p.m., when the House re-assembled for the afternoon sitting, Speaker Prem Chand Aggarwal read the Governor’s address which then became the part of the proceedings. The Congress members continued to boycott the House but independent MLA Preetam Singh Panwar was present. He was present in the morning sitting also and did not participate in the protest! The House then approved by voice vote the proposals recommended by the Business Advisory Committee of the House regarding agendas for the coming days of the session. The House was then adjourned till 11 a.m. tomorrow!
Later, speaking to this correspondent, Leader of the Opposition Indira Hridayesh claimed that, as per the traditions of the House, the proceedings never ought to start before the stipulated time and this meant that the ruling party did not want the presence of the Opposition members, which forced them to walk out of the House. She stressed that the Opposition members were also part of the Assembly and therefore it was entirely wrong on the part of the government to start the Governor’s address before 11 a.m., which was the scheduled time according to the agenda set by the Business Advisory Committee of the House. It was against the democratic traditions to do so, she alleged.
However, speaking to this correspondent, Parliamentary Affairs Minister Prakash Pant claimed that all the Members of the House had been urged through a message sent to them to assemble in the House by 10.45 a.m. Pant admitted that the Governor had arrived a little earlier than the expected time but added that the agenda did not mention the time for the Governor’s address to the Assembly. He also asserted that the government had no role in the early start of the address and there was nothing illegal or against the rules in the occurrence of such an event. He claimed that the Opposition was needlessly politicising the incident!