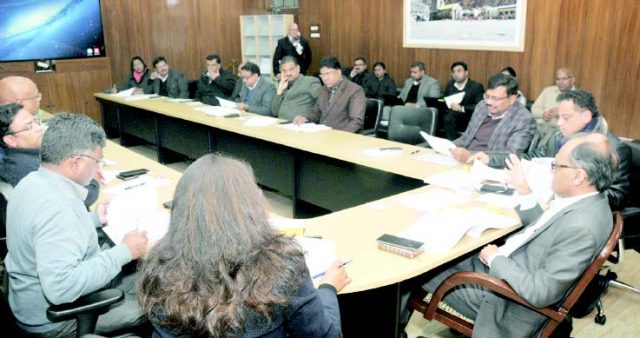 By OUR STAFF REPORTER
DEHRADUN, 23 Jan: A meeting of the Single Window System and the State Authorised Committee, under the chairmanship of Chief Secretary Utpal Kumar Singh, was held at the Secretariat Auditorium on Wednesday.
The Chief Secretary sought feedback from entrepreneurs on suggestions made by various departments. The Chief Secretary directed the officers to resolve the problems of investors by giving personal attention in a speedy manner. The progress on implementation of the MoUs signed during the Investors’ Summit was reviewed.
Additional Secretary, UREDA, Captain Alok Shekhar Tiwari disclosed that the necessary tenders for three small hydroelectric projects of Pithoragarh had been published and the Energy Purchase Agreement for the 2.4 MW capacity Bio Gas Project Power Project by Root Hydrocarbon Pvt Ltd, Haridwar, had been done with the UPCL. Work on the project had started and the tenders for the Solar and Pirul-based power generation plants had been sent to the Finance Department, which would be published next week.
During the discussion on Horticulture, Director, Horticulture, RP Shrivastav said that Stellar Cold Chain Project, a food and processing unit costing Rs 18.86 crore had been established. He spoke about the changes in land use for Sun Light India Agro Productions Limited. He said that around Rs 20 crores would be invested in this unit, which would be set up in an area of 1 hectare. He also gave updated information on the progress of Himalaya Mega Food Park, Mahua Khera, Kashipur.
The Chief Secretary was informed about the MoUs done department-wise by the Secretary/Head of each department concerned.
Approval has been granted by the Authorised Committee to proposals worth Rs 78 crore under the Single Window. Proposals of Rs 600 crores were related to permission for land purchase. The Chief Secretary directed that these should be presented in the forthcoming meeting with comments from the Department of Revenue.
Updated information on progress of proposals related to the Excise Department by Principal Secretary Anand Bardhan, Ayush and IT by RK Sudhanshu, Tourism by Secretary Tourism Dilip Jawalkar and Health by Secretary Nitesh Jha was provided at the meeting.
The meeting was conducted by Principal Secretary Manisha Panwar.