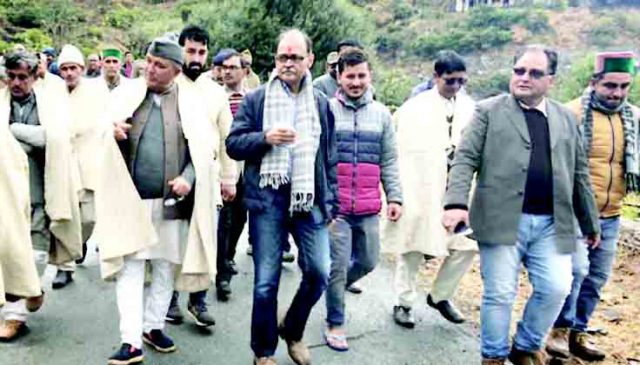 By OUR STAFF REPORTER
DEHRADUN, 7 Jan: Chief Secretary Utpal Kumar Singh visited the Himalayan Action Research Centre (HARC), Naugaon, on Sunday. He observed the Himalayan Action Research Centre (HARC) plant tissue culture lab and soil testing lab. HARC Secretary Mahendra Singh Kunwar held discussions with the Chief Secretary on the initiative taken by HARC on PCDO (Mother Orchard) of apple in the state, opening the market in the interest of the farmers of the Ravai Valley, etc. In this regard, instructions were issued by the Chief Secretary to the District Magistrate.
The Chief Secretary appreciated the latest efforts of HARC and the leadership of the entire team. He praised the innovative experiments in the agriculture sector.
District Magistrate, Uttarkashi, SDM, Badkot, the General Manager of Sutlej Hydro Project, President of the Ravai Valley Fruit and Vegetable Producers Association, Jagmohan Singh, Office Secretary and District Officials were also present on the occasion.
The Chief Secretary also visited remote areas of Tiuni, Hataal, Naugaon, etc. During the tour of Lakhamandal, the Chief Secretary gave detailed instructions to the nominated consultant for this newly selected destination. He said that 13 new destinations were being developed in 13 districts of the state and Lakhamandal had been selected in Dehradun.
He inspected the work done under the government-run livelihood scheme in Hanol area. He also held interactions with the farmers. He saw the innovative experiments done in the field of agriculture by a farmer, Premchand Sharma, in Hataal. During the talks, the demand for a drinking water project and veterinary hospital in the area was made by the farmers, regarding which the Chief Secretary instructed the officials concerned.