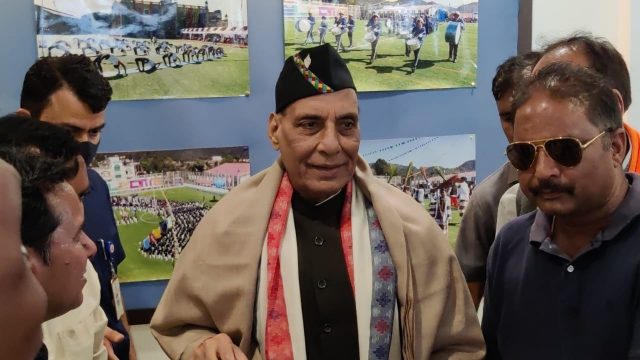 By Our  Staff  Reporter

On his arrival in Uttarakhand, CM Pushkar Singh Dhami welcomed him at Jolly Grant Airport. Cabinet Ministers Ganesh Joshi, Saurabh Bahuguna and Rajya Sabha MP Naresh Bansal were present on the occasion. Following this he left for Mussoorie.

On the occasion, he said that India believes in the spirit of ‘Vasudhaiva Kutumbakam’. But, the Indian Army is always ready to protect the borders of the country. He said that civil-military coordination is important. “We will establish complete solidarity with the armed forces. Defence equipment is being manufactured in the country itself and, in the coming times, India will not need to depend on other countries of the world for this.” He added that India never wants war with any country and, till date, India has not occupied the land of any other country. All the steps taken for the modernisation of the forces and the self-reliance of the defence sector have begun to show results. At present, India is not only making military equipment for itself, but also increasing the production to meet the needs of other countries. Singh further said that the vision of national security has now become much broader than before.

Lal Bahadur Shastri Administrative Academy Director Srinivas K Katikithala welcomed Union Minister Rajnath Singh to the inauguration of the 28th Joint Civil Military Training Programme, which will guide the senior officers the Army, Navy, Air Force, IAS and IPS on coordinated action. He added that all should work jointly for the defence of the country and development, and confront the challenges facing the country. These nowadays are not just in the military sector; there are different technological and internal security challenges for alle. All needed to work unitedly so that the country could be made strong.

Garhwal Post has established itself as a credible, balanced and forward looking newspaper in India. Based in Uttarakhand, the daily is read by the aware, socially and culturally responsible, high-income elite of society.
Contact us: info@garhwalpost.in
vivastreet belfast gay dating casual encounters personals veterans dating site