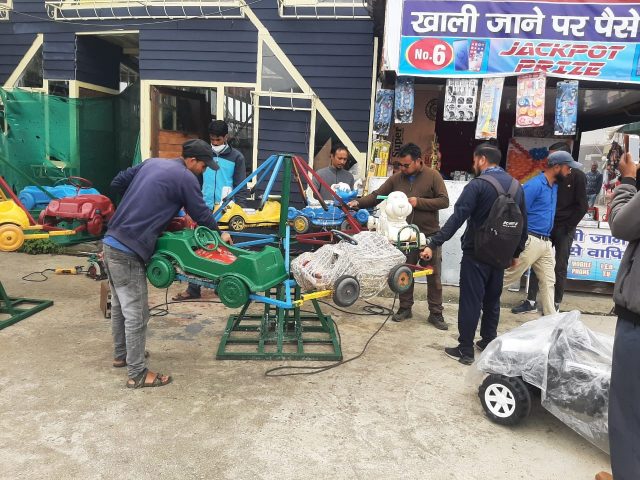 By Our Staff Reporter
Mussoorie, 12 Aug: Unauthorised occupation and encroachment on the roof of the reservoir tank at Gunhill, here, has become a threat, in view of which, a team of Garhwal Jal Sansthan under the leadership of Assistant Engineer TS Rawat undertook to clear it today. The swings installed on the reservoir by the shopkeepers were also confiscated. The Assistant Engineer has warned against encroachment on the roof of the reservoir in any way. There was also a tussle between the traders and the officials of Garhwal Jal Sansthan regarding the action.
The condition of the Gun Hill Reservoir, built during the British era to supply drinking water to Mussoorie, has gone from bad to worse. It is under threat due to continuous encroachment and occupation on the terrace. Strict legal action has been threatened by the department if anyone encroaches on the reservoir.
Assistant Engineer Rawat said that it had been a 100 years since the reservoir was built and its condition is not good. There is a great danger to the reservoir tank, which is filled with drinking water throughout the year, so any untoward incident can happen at any time. A written complaint has been made to the administration. The repair work will be done soon by the Uttarakhand Garhwal Jal Sansthan. Present on the occasion were Junior Engineer Abhay Teerthwal and departmental employees.