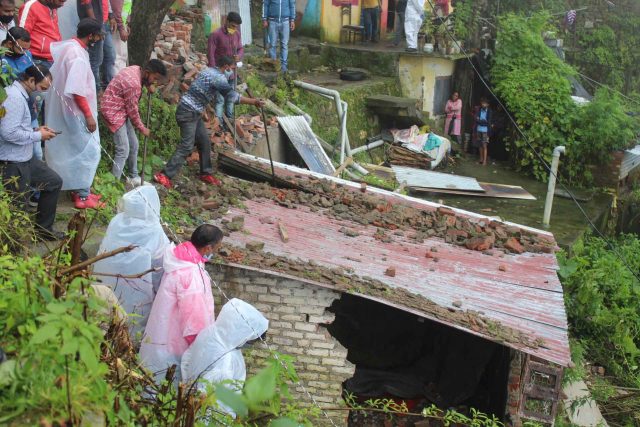 By Our Staff Reporter
Mussoorie, 24 Aug: Nearly a dozen houses were to be demolished here, today, as part of the process of removing encroachments from Shifan Court. After an appeal made by MLA Ganesh Joshi to Chief Minister TS Rawat and, considering the heavy rain, it was decided to suspend the operation and allow the 61 encroachers to shift from the site by 10 September by submitting an affidavit in this regard.
MLA Joshi thanked Chief Minister Rawat for giving 15 days time to remove the encroachment.
To construct a platform at the Shifan Court for the Mussoorie Purukul Ropeway Project, action was taken by the District and Municipality Administration and the Police to remove encroachments by 84 families living on government land at the site. The campaign was jointly carried out with heavy police force under the leadership of ADM, Administration, Arvind Pandey and SP-City Shweta Chaubey. The action of demolition was strongly opposed by the local people’s representatives and the affected families.
The area was converted into a cantonment by the administration. After stopping the encroachment in the morning, despite the light rain in the afternoon, the administration started the process of removing the encroachment. By late evening, 61 illegal occupiers submitted affidavits on removing the encroachment by themselves within 15 days.
Before the encroachment drive started, MLA Ganesh Joshi reached the spot and requested Chief Minister Trivendra Rawat for a postponement of the encroachment for 15 days. ADM Arvind Pandey said that for this all the occupants would have to submit the necessary affidavits. This was opposed by the illegal occupiers. It resulted in an argument between MLA Joshi and some locals, who said they would not move under any circumstances. Later, however, the matter was resolved. The MLA promised to help the displaced persons.
Labour leaders Devi Godiyal and RP Badoni said that they were stopped by the police a kilometre away, while the BJP leaders were allowed to reach the site. They threatened an agitation on the issue.
ADM Arvind Pandey, SP-City Shweta Chaubey, City Magistrate Gopal Ram Binwal, Mussoorie SDM Manish Kumar, Executive Officer Ashutosh Sati, Mussoorie Kotwal Devendra Aswal, former Kotwal Bhavna Kainthola, other officers and police personnel were present on the occasion.
Tourists will be able to travel from Dehradun to Mussoorie in just 16 minutes on the proposed Dehradun-Mussoorie ropeway project. Right now it takes up to one and a half hours to complete this journey. The construction work of this ropeway has been given to a French company. The cost of construction is estimated at around Rs 450 crore.