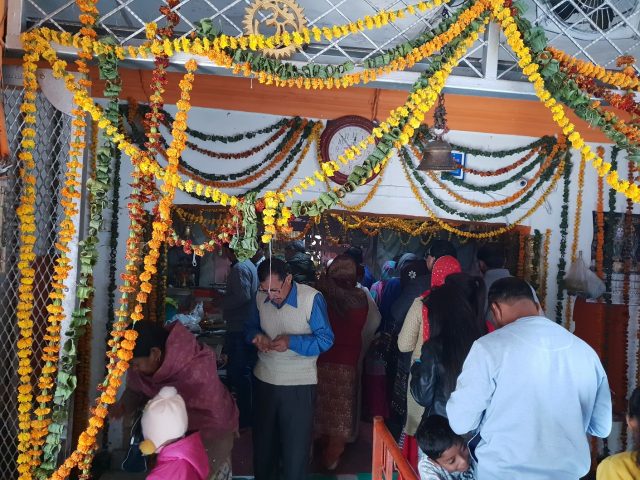 By AMIT POKHRIYAL
DEHRADUN, 7 Feb: Dehradun has had, for long, the four Siddha Peeth that are established at different sites in the district. It is believed that if all the four Siddhas are visited in a single day on an empty stomach and, later, taking a dip in River Ganga in Haridwar, one’s wishes are fulfilled. According to belief, in the middle of the Treta Yuga, the great Rishi Attri and Mata Sati Anusuya lived in their ashram. The Tridev (Brahma-Vishnu-Mahesh) gave them a boon that they would have a son. The son was extremely high spirited and sharp minded since childhood. Later he studied under 24 gurus and mastered all the genres. He came to be known as Guru
Dattatreya. He had 9 Naths and 84 disciples. Dattatreya, on getting old, summoned his 84 disciples and accorded them equal rights, saying that they would achieve salvation by worshipping Shiva. Out of these 84 babas, 4 babas- Kalu Baba, Lakshman Baba, Manak Baba and Baba Mandu walked towards Kedarkhand in the north and settled at different places in Dehradun. They continuously performed severe religious austerities for many years and a pleased Shiva asked them what they wanted. He blessed the four with divine
powers. Even today, the Shiva Linga is present and worshipped at all four Siddhas. Kalu Siddha is situated in Kaluwala village, which is to the east of Doon, located 4 kms from Bhaniyawala on the Rishikesh road; Laxman Siddha is situated in Harrawala on the Dehradun Haridwar road in the southern direction; in the west near East Hope Town-Karbari Grant is Manak Siddha, while
Mandu Siddha is located in Premnagar-Amwala by the side of the Nimi River in the north. The prasad is mainly a preparation of jaggery, flowers, milk, sweets and red chunnis. The state government should take interest in setting up a pilgrimage circuit of these ancient Siddhas of Doon by arranging proper transportation facility to cover all four on the same day. Beautification of the
places nearby these Siddhas should be done, especially at Mandu Siddha as it doesn’t have a proper approach road. All 4 are located in beautiful scenic locations, all that is needed is to make them popular and provide facilities so that people of the state and outside can perform this spiritual journey.