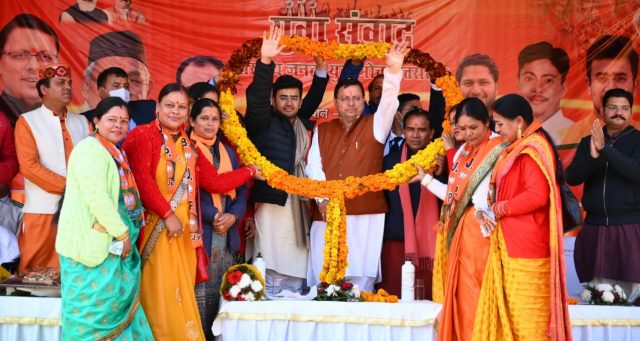 By Our Staff Reporter
Dehradun/Srinagar, 21 Dec: Chief Minister Pushkar Singh Dhami and Bharatiya Janata Yuva Morcha (BJYM) National President and Bengaluru MP Tejashvi Surya today addressed a public meeting in Srinagar while participating in a youth dialogue programme.
In his address to the gathering, Chief Minister Dhami said that he felt proud to be amongst the youth. He said that a youth was a person whose voice and intentions were loud enough to be heard and the one who knew how to make the impossible possible. He called upon the youth present to choose their goals well and take wise decisions in life. He added that the power of the youth would change the fate of the state. The youth would lay a new foundation of development in Uttarakhand.
Dhami claimed it was the priority of the state government to provide adequate opportunities to the youth to progress. He also reminded the gathering that in order to connect the youth of the state with employment, the recruitment process was underway for 24,000 posts in the government. Chief Minister Dhami also cited some of the social welfare schemes bring launched by his government like the Vatsalya Yojana, Mahalaxmi Kit, etc.
Bengaluru MP Tejasvi Surya also addressed the gathering and called upon the youth to come forward and make maximum use of the opportunities that were being provided to them by the Narendra Modi Government at the Centre and Dhami Government in Uttarakhand.
Cabinet Minister Dr Dhan Singh Rawat, BJYM National Vice President Neha Joshi, BJYM State President Kundan Latwal were also present.