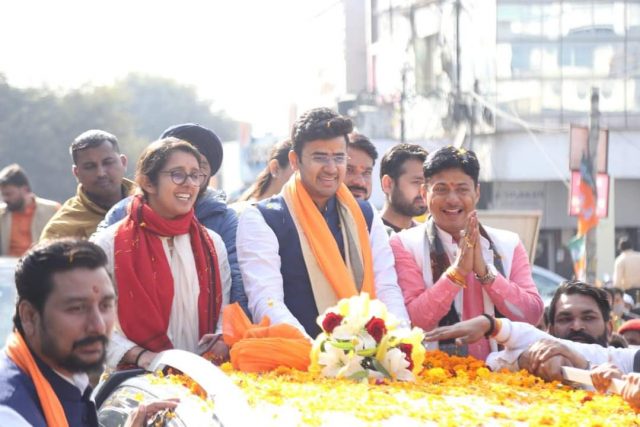 DEHRADUN, 21 Dec: Bharatiya Janata Yuva Morcha (BJYM)’s National President Tejashvi Surya today morning visited the Tapkeshwar temple, and offered prayers and performed Jalabhishek there and sought the blessings of Shiva. Later after participating in a cricket match with the CM, he reached Srinagar where he participated in a bike rally from the helipad. The rally was accorded a grand welcome at various places. Speaking with the youth there at a function and in an interaction with the BJYM leaders, Surya praised Chief Minister Pushkar Singh Dhami and claimed that none else could have done so much for the state in a brief span of 5 months as has been done by Dhami. He said that the government in Uttarakhand has taken several praiseworthy and historic decisions and establishing a Sainik Dham in Uttarakhand is one such historic decision. He also claimed that the Congress would find it almost impossible to defeat such a dynamic chief minister as Dhami in the upcoming elections. Surya said that he has travelled all over the country, but the amount of love he received in Uttarakhand from the Yuva Morcha workers in Uttarakhand and the enthusiasm of the workers shown was extraordinary. He said that Uttarakhand is the land of the brave and it is the land of General Bipin Rawat and therefore Uttarakhand is looked at with huge respect across the country. Surya said that BJP is a party of workers and not of any particular family and that there is only one option in the state for the youth and that is choosing the BJP. He also reminded that while the BJP workers had genuine respect for General Rawat, Congress leaders had called him a street goon which is an insult to the Veer Bhoomi. BJYM National Vice President Neha Joshi was also present on the occasion.