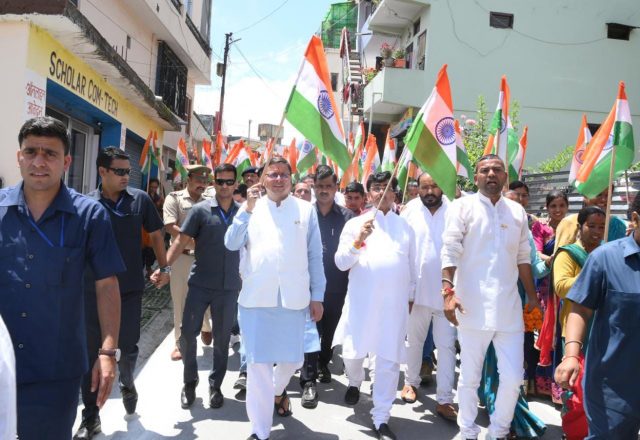 Champawat, 13 Aug: Chief Minister Pushkar Singh Dhami participated in the ‘Har Ghar Tiranga’ campaign in his constituency, Champawat, today. The function was held at the Government Inter College in Manch, a remote border area of ​​Champawat. This area is believed to be the revered land of Baba Gorakhnath.

Dhami prayed to Baba Gorakhnath and said that it was by the Baba’s grace that people of Champawat had given him an opportunity to serve the state of Uttarakhand, for which he would always be deeply grateful. He reminded that he had promised setting up of a Sub-Tehsil in Manch area of Champawat and was happy to note that it is now fully functional.

The Chief Minister claimed that the government is fully committed to development of the border and remote areas of the state and is trying to ensure that there is no dearth of doctors in the hospitals. The deployment of doctors has begun in the hospitals of the hills. He claimed that plans had been made to solve the problems related to the functioning of schools, connectivity, electricity, connectivity and work is being done on them.

The CM promised that, in the coming times, the people of this area would not have to face any kind of problem related to education, health, etc. He claimed the government is working to ensure rapid development in the region.

The CM reminded that, at the call of Prime Minister Narendra Modi, the ‘Har Ghar Tiranga’ campaign has become a mass movement. The Amrit Mahotsav of Independence is being celebrated all over the country. Dhami asserted that the Tricolour is the pride of every Indian and every citizen ought to display it with pride at his or her house. Many people sacrificed their lives for the freedom of India. This Amrit Mahotsav is an opportune moment to remember them all. He said that, 25 years from today, when the country would be celebrating 100 years of independence, these 25 years from now would be known as Amrit Kal.

Garhwal Post has established itself as a credible, balanced and forward looking newspaper in India. Based in Uttarakhand, the daily is read by the aware, socially and culturally responsible, high-income elite of society.
Contact us: info@garhwalpost.in
https://garhwalpost.in/hooking-up-with-a-trans-woman/ foreign singles dating