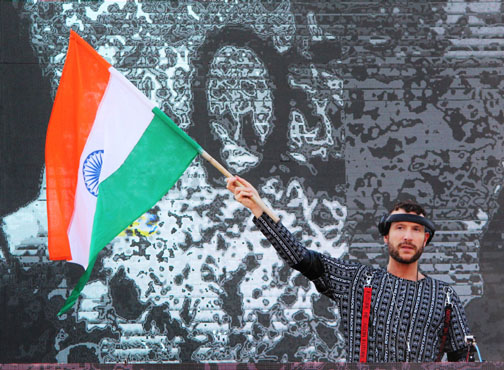 By OUR STAFF REPORTER
Dehradun, 5 May: World famous DJ Don Diablo today performed many popular songs at Graphic Era in a way that thousands of students danced endlessly in spite of the scorching sunlight. The event lasted for a long time. Dutch DJ Don Diablo waved the tricolour several times on the platform and declared the youth, who danced in the sun, as the most zealous in the world.
On the last day of the three day annual fest, Grafest-2019, of Graphic Era Deemed University and Graphic Era Hill University, DJ Don Diablo reached Dehradun, yesterday, to make the evening a musical one. After the event was cancelled last evening, Diablo presented himself at the university this afternoon. Don Diablo started his show with the song “I Gotta Love”.
Don added to the excitement of the crowd and left them dancing with joy by packaging – “This World Can Hurt You It Cuts You Deep and Leave a Scar, Things Fall Apert but Nothing Breaks Like a Heart ….” song in his style of music.
The youth dancing to the tunes of Don Diablo came to welcome him with self made masks and wigs. Most students carried banners in their hands with the name of Don Diablo written on it. Even the scorching heat had no effect on the students and did not deter them from dancing. Don Diablo during his performance said that he had not seen such passion in the youth of any country till now.
Excited after seeing the enthusiastic youth, Don Diablo performed –“Do You Remember when We Moved Out, My Mumma said I Love You But It’s a Small House …” for the first time in India. He dedicated “Never enough you will always find those days when its rough but you need to feel existent, keep it real and be persistent… song to the deceased students, Mohit Rawat and Shweta Butola, who died a tragic death on the night of 3 May.
On the last evening of Grafest-2019, DJs ACEAXE and The Untold performed many popular songs in their music for the students. These two popular DJs kept the youth’s passion alive till the last. Earlier, today, the last round of cultural events took place in the Grafest 2019.  Bhangra Beats, Virsa and teams from Bhimtal gave fantastic performances in the Bhangra competition. Under this competition, a western dance was presented with Punjabi fusion in the form of Bhangra. There was a strong fight between dance groups “Incredibles” and “Rhythm Slaves” in group dance. In the band war, the bizarre band gave a stunning performance.
Graphic Era Deemed University’s BTech student Yash Tomar, showcased the problems of everyday life through his Mono Act in such a way that the auditorium echoed with claps.  Yuvraj Singh’s Mono Act was also much appreciated. Poems of Afzal Siddiqui, Satish Rawat and Abhishek Tiwari were liked too. Sabin and Akash Rawat took applause from the crowd for their rap performance.