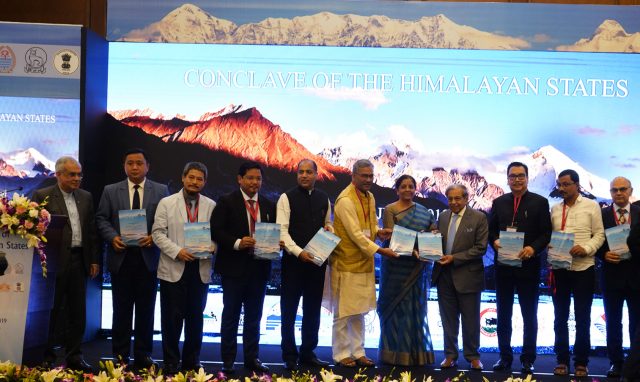 Mussoorie, 28 Jul: Union Finance Minister Nirmala Sitharaman today expressed deep concern at the migration from border areas of Himalayan states, even as the first ever Conclave of 11 Himalayan states kept its major focus on seeking a green bonus from the Centre. It was the first such conclave of the 11 Himalayan states held to find common grounds on their issues and to share their concerns. The initiative for the conclave was taken by Uttarakhand Chief Minister Trivendra Singh Rawat, who hosted the conclave.
It is also perhaps for the first time that the Himalayan states have come together to take a united stand on the issue of green bonus in recognition of their contribution to environment conservation. In addition to demanding a Green Bonus for the Himalayan states, all the states also unanimously agreed to demand a separate union ministry to deal with the unique problems faced by them due to their location as well as environmental issues. Both these demands were part of the memorandum that was handed over to Sitharaman at the conclusion of the Conclave in form of a common agenda.
Yet another issue discussed during the conclave today was the demand for a separate agriculture policy for the Himalayan states, with provisions for additional subsidies and grants due to the unique difficulties faced by the farmers in the hill states.
The Conclave was inaugurated by Union Finance Minister Nirmala Sitharaman who, in her address, expressed deep concern at the continued migration from the border areas of these states. She claimed that the development of hill states was an issue of high priority for the Modi Government. She applauded the contribution of the hill states in the development and security of the country. She expressed the hope that the conclave would play a useful role in defining future policies for the Himalayan states. She also laid stress on the need for special efforts to arrest migration from the hills and especially from the border areas. She expressed confidence that the Panchayats could play a significant role in this. Sitharaman also stressed on the need to establish a balance between development and conservation of the environment. She assured those present that the Centre would seriously consider the demands raised at the Conclave, and also mull over the concerns expressed by the states at the Conclave.
Later, briefing the media after the conclusion of the conclave, Chief Minister Trivendra Singh Rawat claimed that it was very successful and the states managed to find common ground on all the issues raised during the meeting. He also said that most of the country’s rivers originated in the Himalayas and therefore the states had to play the most significant role in the prime minister’s water conservation initiative. He added that forests formed a large part of the geographical area of these states and by conserving them the Himalayan states were playing a great role in conservation of the environment even at the cost of development. The proposed Green Bonus was a genuine demand as compensation for the immense service rendered to the nation by these states. He stressed that development was the biggest casualty due to the need for conserving the forests and the environment.
Chairman of the 15th Finance Commission NK Singh lauded the efforts of Uttarakhand in hosting the conclave. He claimed that the Finance Commission would consider the demands of the Himalayan states in a very sympathetic manner. Himachal CM Jayram Thakur raised concern at the loss of revenue to the Himalayan states due to GST. Deputy Chairman of the NITI Aayog Dr Rajiv Kumar said that Himalayan states had great potential in some niche areas like tourism and value added agriculture. Special efforts were required to attract more foreign tourists to these states, he added.
Meghalaya CM Conrad Kongkal Sangma, Nagaland CM Neiphiu Rio, Arunachal Pradesh Deputy CM Chowna Mein, Mizoram minister TJ Lalnuntluanga and Tripura minister Manoj Kanti Deb, along with senior officials from other states and the Centre, were present at the conference. Assam, however, went unrepresented due to the flood situation prevailing in that state. Also present were Secretary, Department of Drinking Water & Sanitation, Ministry of Jal Shakti, Parameswaran Iyer and member, National Disaster Management Authority, Kamal Kishore.