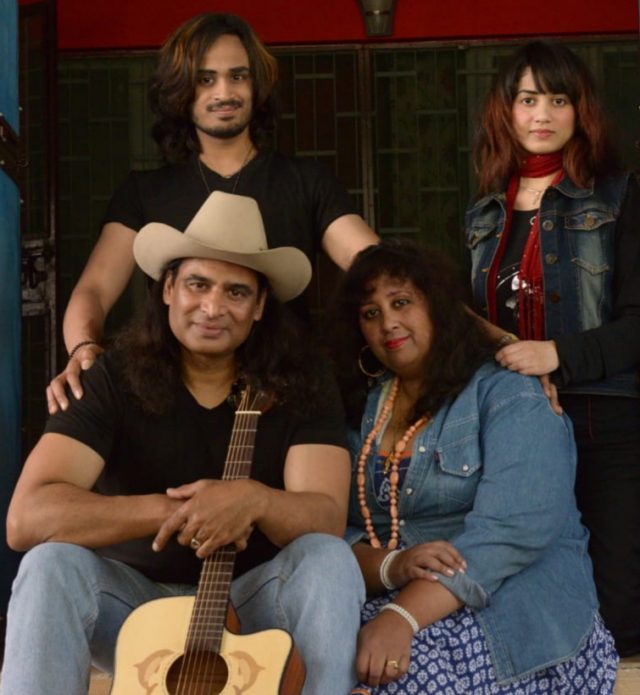 Bobby Cash craves to master the magical world of music beyond and within!

The Singer’s Art:  Singing has always been his natural priority. He is amongst the most talented representatives of music that Uttarakhand’s soil has gifted to the world: he is the first Indian to release a Country Music album in India, which makes him a pioneer. His guitar can mesmerise audiences in any part of the world!

His genre is Country Music, and he has mastered the epic songs of yore with amazing dexterity. Apart from his skillful singing, the most striking part of his performance is the speed with which he strums the guitar. And he can sing and strum for hours. His personal guitar style encompasses bass lines, rhythm, and finger-picking. He calls it a hybrid flamenco “south of the border” style that creates the effect of an entire band playing.

“Country music is very close to the Indian spirit, as it relates to life, rootedness, family, home, belongingness, and above all the heart,” he remarks. “In the ‘60s, music was amongst the few forms of entertainment. And I was hooked on to it like mad.

Born as Bal Kishore Das Loiwal, he was called ‘Babu’ at home which became ‘Bobby’ and Kishore became ‘Kish’ which in turn became ‘Cash.’ He traces his lineage on his mother’s side to a Maharaja. His ancestors converted to Christianity under the influence of missionaries, introducing the new generations to a transformed way of life.

It was during his growing up years in Doon that he began connecting in depth, with music. Born into a way of life where singing was a day-to-day affair and primary ingredient of all festivity, he developed an insatiable appetite for music. Records from Nashville were overwhelmingly available to him through friends and relatives, and that proved to be a life-changing experience for him and later led to his total focus on music. Encouragement also came in the person of his mother, Jean Christine, who sang and wrote lyrics that were rooted in kindness, caring, love and deep insight into humanity. “Home for me was an incubator of sorts for music, as my mom was a keen singer and an uncle made electric guitars, and most of my cousins and siblings were all were deeply into music,” he recalls.

Destination Tamworth Country Music Festival: His father, Seth Bal Gopal Das, was born affluent and was exposed to the best of life’s offerings. Bobby was challenged to take on far greater responsibility for the family, when the fortunes dwindled as a result of his father’s accident. He set up a school for underprivileged children on his family land in Doon and shifted to Delhi to try his luck in music.

In Delhi, he took on a regular gig engagement at Rodeo in Connaught Place and Oberoi Hotel, where he became a major draw. Most Australians who heard him sing in Delhi would suggest that his true destination was the Tamworth Country Music Festival in Australia, and this, then, became his life’s core direction.

In no time, he became a smash hit at this festival, when television producers transported him as subject of their documentary titled, ‘One in a Billion’.

“I was spotted by Australian producer and director Colin Bromley and his co-producer Gerry O’Leary,” recalls Bobby. “I delighted in singing amongst people who sang and appreciated my kind of songs. Overnight, I became a celebrity, and was cheered and celebrated.”

This was God’s script unfolding before his eyes! There was no looking back, thereafter. Today, he is the media’s darling, tours the world regularly, and sings and composes in the peaceful surroundings of his home. Bobby Cash lives with his wife Angelina and two children, Saira and Ricky, in Clement Town.

Before long, it was destination Nashville and a larger stage. Here the CMA nominated him in the Global Artist category. He received a standing ovation from none other than the President of the CMA, Ed Benson, who hailed Bobby’s singing as the ‘real deal’ at the Global Artist Showcase on The Stage, Broadway. This further nurtured and heightened his value as an artist, familiarised him to the music lovers in America, who announced him as a new ‘spark’ on the musical horizon. His exceptional deftness on the guitar added to his stature as an artist. He went on to perform at some of the coveted venues of the world, including WSM Midnite Jamboree at ET Troubadour Theatre, and Billy Bobs in Dallas, Fort Worth.

Making Music in the shadows of the Himalaya:

Bobby has made a conscious choice not to live out of suitcases, “Though I love to travel the world, I do not want a life where I am reduced to travelling at break neck speed to stage one show after another. I have made a choice to be out of the rat race. I want to spend the maximum time with my family and my people, and live a calm and peaceful life in the shadows of the Himalayas. I abhor the jet-setting world of competition. I tour the world for my concerts, but long to sit and relax by the fireside at home and compose and write my music. Home is where I get my flashes of creativity and where I rejoice in childhood memories. ”

Bobby’s inspirations have been musical greats such as Jim Reeves, Johnny Cash, Millie Nelson, Merle Haggard, Kenny Rogers and the like. And just like them, he loves to dress up in all the country music finery including a cowboy hat, tasseled jacket, and leather boots. “Yes, this is the attire that I am comfortable in,” he asserts. “It makes me a complete package and gives me an identity that is cool, lively and fashionable.”

Talking about the core of Country Music he says, “It commemorates real life, real people and real situations and revels in issues that are close to the heart, and makes life purposeful. It is about growing up and cherishing memories of those years. Such themes instantly connect with the heart and make country music soulful, constituting its true appeal. For me, my music yields the rootedness with my people, my state and my country that is vital for me.”

Ricky following in his father’s footsteps: “I am so pleased to see my son Ricky with the same passion and love for music as I have had all these years, ever since my younger days. I have always encouraged him to do what he loves and wants to do. I am so glad he was blessed with a talent and a heart to follow in my footsteps. I tell him to do music his way, and what comes to him naturally from me stays with it and takes it to the next level. Comparisons will be made, but get the positive vibes out of it. Love what you do, work hard at it, be the best, connect with your audience from the heart, be patient and humble. Enjoy the journey. Trust in God and love to care for people. Let your music be your true identity!”

My wife, Angelina, has been with me throughout my journey. I got into full time music only after we were married and my daughter, Saira Sharon, was more than two years old. Not the time you would expect somebody to get into the rollercoaster uncertain world of entertainment. Yet, she encouraged me to go ahead and share the talent God gave me with the world at large. She has been at my side and made life beautiful and a great adventure. She has been a great encourager, very honest critic, helped me with song writing, being a very creative person herself. She has been a great mother to our children and because of her, home is where I always want to be!”

Fulfilling his social responsibility: Fighting social ills is an integral part of Bobby’s life. He has staged a fundraiser concert in aid of Nijaat, a Doon based organisation fighting drug abuse. Earlier, he also performed for the Leprosy Mission and is keen to work for the welfare of animals in the near future. “Singing for me gains a totally new meaning when I perform for a cause,” he articulates.

Conferred a doctorate in music: Bobby is also the proud recipient of an honorary doctorate in music. This honour was bestowed on him by Kathmandu International University/Jesus College, Kathmandu, Nepal. “I was on cloud nine as this honour meant more people getting into my musical fold,” he gushes. “Music for me is worship and I gladly received this honour feeling reverent and humble. Dr Bobby Cash sounds so amazing,” he chuckles.