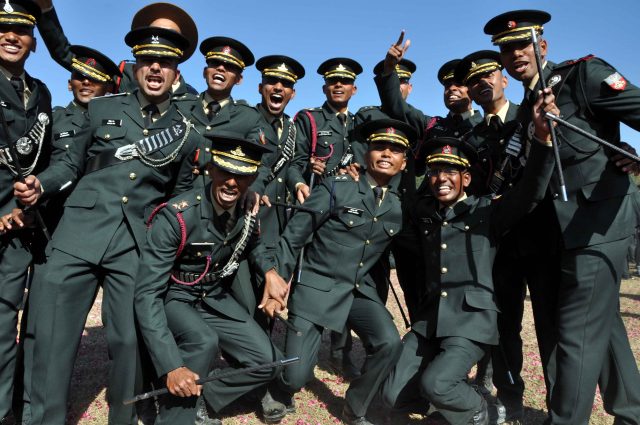 DEHRADUN, 7 Dec: 377 Gentlemen Cadets of 145 Regular Course, 128 Technical Graduate Course, including 71 Gentlemen Cadets from ten friendly foreign countries passed out from the portals of Indian Military Academy, Dehradun on 07 December. Rajnath Singh, Defence Minister, reviewed he parade. The Gentlemen Cadets displayed tremendous enthusiasm, vigour and zeal, and put up an excellent show, marching to Military tunes of `Col Bogey’, `Sare Jahan Se Achha’ and Kadam Kadam Badhaye Ja with pride and élan.
Congratulating the GCs on successful completion of their training at IMA, the Defence Minister, complimented all Gentlemen Cadets for the excellent parade, immaculate turnout as well as the crisp and energetic drill movements indicating high standards of training and discipline imbibed by the young leaders. 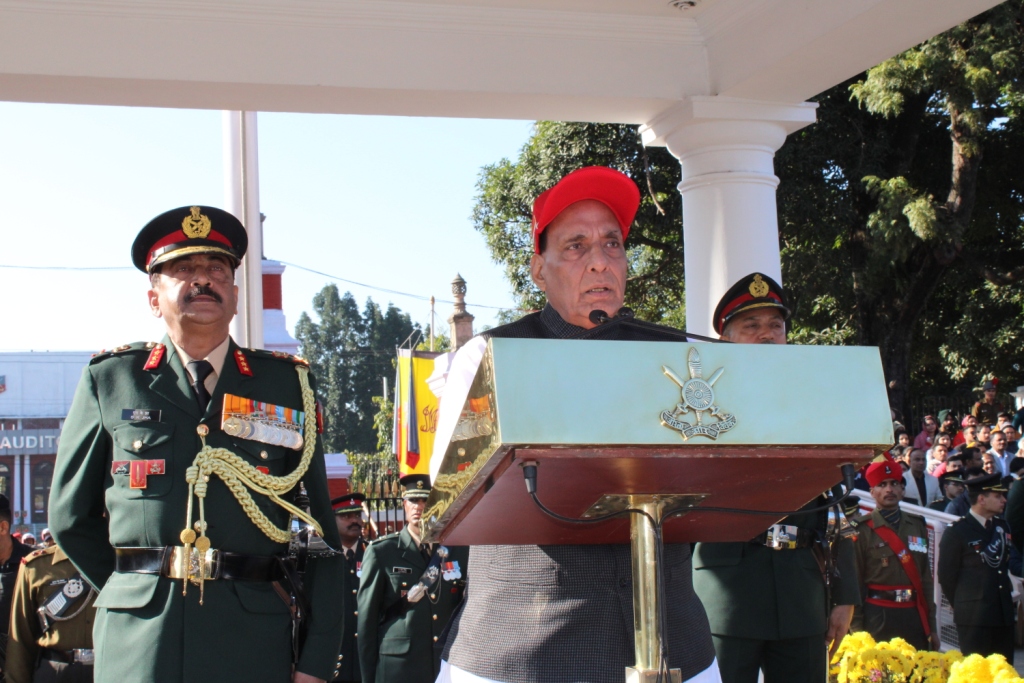 Singh also complimented the 71 Gentlemen Cadets from friendly foreign counties, who have been in India and at IMA for one year. He said “I am sure, you as ambassadors of your country will carry back a treasure of good memories of the place and training with you and will cherish them for a lifetime. The Indian Military Academy has imparted training to you which will form the bedrock for your growth both professionally and personally and will definitely strengthen the ties between our countries”.
While addressing the Passing out Course, the Defence Minister, congratulated the Gentlemen Cadets on their being commissioned into the Indian Army in service of our great nation. He conveyed, that the country is indeed proud of each one of you who shall be Passing out from the portals of Indian Military Academy and take on the challenges that will require many sacrifices, trials and tribulations He reminded them to always keep in mind the Chetwode Motto and the Honour Code while dealing with the formidable task of being military leaders of the future. He also praised the parents of the passing out course who had motivated their wards for having chosen such a Noble Profession to serve India and stand between any threat that our country might be required to counter. The Hon’ble Defence Minister of India also announced that Indian Military Academy will soon get two under pass. Two under passes will cost 42.32 Cr. These under passes will enhance the security of Indian Military Academy and convenience of general public.
The Reviewing Officer presented the following awards:-
– The coveted award of the Sword of Honour and Gold Medal was presented to Academy Under Officer Vinay Vilas Garad.
– Silver Medal for the Gentleman Cadet standing Second in the Order of Merit was presented to Senior Under Officer Peekendra Singh.
– Bronze Medal for the Gentleman Cadet standing Third in the Order of Merit was presented to Battalion Under Officer Dhruv Mehla.
– Silver Medal for the Gentleman Cadet standing First in the Order of Merit from Technical Graduate Course was presented to Junior Under Officer Shiv Raj Singh.
– Silver Medal for the Gentleman Cadet standing First in the Order of Merit from Foreign GCs was presented to Gentleman Cadet Kuenzang Wangchuk (Bhutan).
– Chief of Army Staff Banner was awarded to Keren Coy for standing Overall First amongst 16 companies for the Autumn Term 2019.