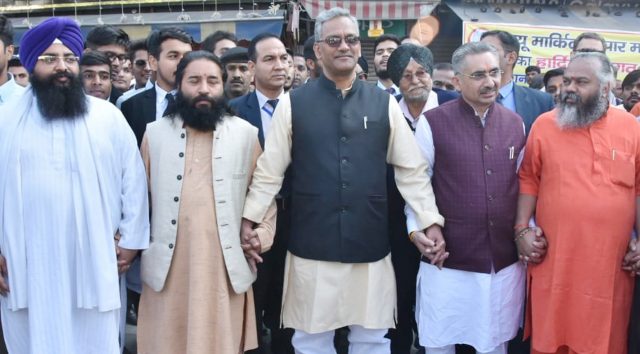 Dehradun, 5 Nov: Chief Minister Trivendra Singh Rawat participated in the ‘Polythene Free Green Doon Mission’ human chain programme organised by the Nagar Nigam, here, today. Over a lakh people took part in this fifty kilometre long human chain. CM Rawat personally boosted the morale of participants on the stretch between Miyanwala Chowk and the Clock Tower. He was accompanied by Mayor Sunil Uniyal ‘Gama’. They encouraged the people to make Dehradun a clean, beautiful and polythene free city.
Taking part in the human chain were public representatives, members of voluntary organisations and NGOs, officials and employees of the government, and a large number of school children. The chain stretched from Miyanwala down Mussoorie Diversion Road to the Clock Tower on to GMS Road, Saharanpur Road and back to the Clock Tower.
CM Rawat said that the exhortation of the PM Modi on ending the role of single-use plastic in the people’s lives was being followed by the residents of Doon. He thanked the people for working on ridding Uttarakhand of single-use plastic. A pledge was also taken in this regard.
Describing single-use plastic as a social evil, Rawat spoke of the damage it caused to humans and the animal world. He claimed the Nagar Nigam campaign on the issue was getting a good response.
Mayor Sunil Uniyal ‘Gama’ reiterated the commitment of the Nagar Nigam to a Green Plastic Free Doon. He claimed the campaign had led to a reduction of 70 percent in the use of polythene.
Also among those present were Additional Chief Secretary Radha Raturi, Principal Secretary Manisha Panwar, Secretaries Amit Negi, Dr Bhupendra Kaur ‘Aulakh’, Arvind Singh Hyanki, Harbans Singh Chugh, SA Murugeshan, Pankaj Pandey, Additional Secretaries Vinod Suman, Sonika, Anand Swaroop and a large number of Secretariat officials and employees.