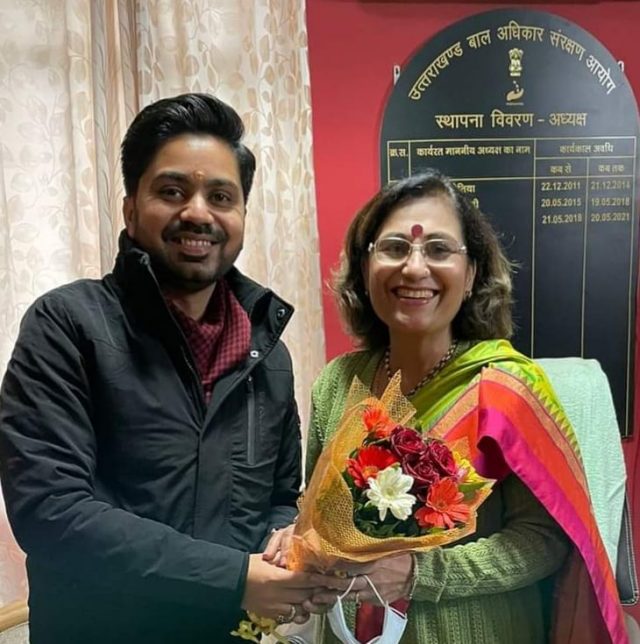 By Arun Pratap Singh
Dehradun, 10 Jan: Newly appointed Chairperson of the Uttarakhand Child Rights Protection Commission, Dr Geeta Khanna says that she would like to focus more on promoting overall child welfare, while not ignoring the regulatory role of the Commission.
Interacting with Garhwal Post, today, Dr Geeta Khanna, who is herself a paediatrician and has been an active social worker having worked for the welfare of children who come from less disadvantageous background, she said that in her opinion every child has immense potential but needs an enabling environment to grow up to be a productive citizen as an adult.
Dr Khanna stated that her objective will be to promote child welfare and not just focus on regulatory functioning. She says that as a paediatrician, she has focused not only the curative aspect of medical science but also on the preventive and promotional part too. These are far more important than the curative aspect. She has been an active social activist and been engaged for a long time in counseling of children coming from less advantageous backgrounds. She agrees that the cases that would be reported to the Commission related to abuse of children in any form, be it mental, psychological, physical or sexual, would be dealt with accordingly. But the Commission during her tenure will not be restricted to just a regulatory role but focus on creating an environment for the children that safeguards their self esteem and protects them from abuse of any kind. Holistic measures would be adopted that would enable them to grow up in a healthy manner.
Dr Khanna further emphasises that during the course of her social work as counselor, she has come across many cases where the exploitation of the child by the parents or by so called guardians of the orphans does stop for a while after counseling, but not permanently. After a gap, the exploitation starts again. She adds that she has found that children born to parents living in urban slums have a very disadvantaged upbringing, as the parents often out of poverty are unable to take proper care of the children. The father often works as a labourer and returns late in the evening and the mother is cleaning the utensils and floors of other people and thus they are not able to take proper care of the children. Therefore counseling alone does not work, the circumstances have to change.
Dr Khanna also appreciated the ground work and roadmap prepared by the first chairperson of the Commission in Uttarakhand, Ajay Setia, and said that she would like to take the commission further in creating a holistic environment for child development and welfare.
It may be recalled that Dr Khanna was appointed Chairperson of the Commission on 7 January and 6 other members too have been nominated.