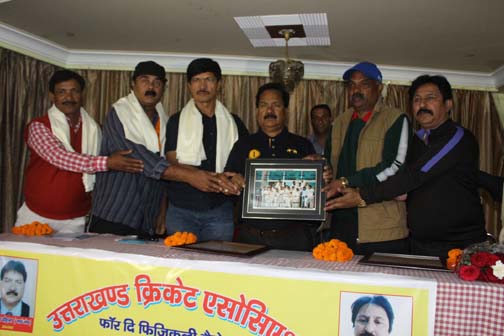 By Sunil Sonker
Mussoorie, 15 Apr: The All India Cricket Association for the Physically Challenged (AICAPC) North Zone President Padam Singh held a press conference here. He said that England would host the World Cup Cricket in August and great enthusiasm was visible among the Physically Challenged Cricket players. He said that after 32 years, BCCI had allowed the All India Cricket Association for the Physically Challenged (AICAPC) to field the official Indian team for the Physical Disability World Cricket Series in the UK in August this year by providing Rs 2 crores.
He said Pakistan, Bangladesh and Afghanistan had already got approval. A zonal competition in Mumbai had been organised by the Association under which the best cricketer were selected for the Indian team. The selection was held under the leadership of former cricketer Umesh Kulkarni. He said that the preparation for the World Cup was in full swing and the training of the selected cricketers would be held in Dharamshala. The names of players from Uttarakhand were also before the selection committee and it was expected that some would be chosen.
Roopchand Guruji, President of the Uttarakhand Cricket Association for the Physically Challenged, said players with 40 percent disability would be given a platform by the association to refine their skills. He said that the association branches would be set up in the 13 districts of the state through which talent would be selected for the state level competitions. He further expressed concern that the Bhiladu Stadium in Mussoorie hadn’t been constructed in the last decade even after the approval of the government.
Among those present on the occasion were Ravi Kumar Anand, Yashwant, Rajkumar, Kamal Sharma, Abrar Ali, Pritam, Narendra Melwan, Amit Kumar Thakur, Imran Khan, Salim Ahmed, etc.