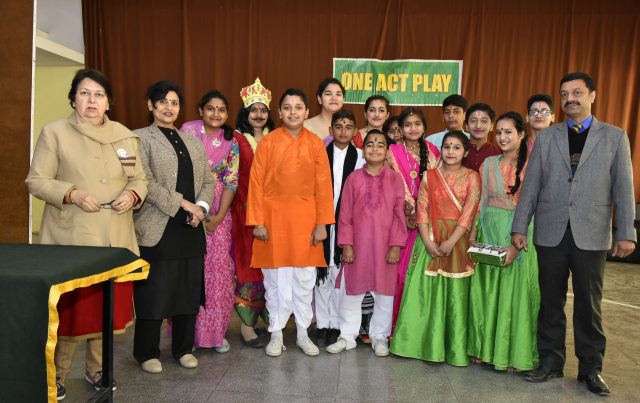 By OUR STAFF REPORTER
DEHRADUN, 4 Feb: On 2 February, St Jude’s School continued with its tradition of organising One Act Plays as an Inter House Competition to enhance knowledge, dramatic skills and promote acting ability amongst the students.
The plays were enacted featuring the mythological stories from the famous, Amar Chitra Katha.
The acting skills of the students generated thunderous applause from the audience. The quality of plays selected and the execution of each play by the four houses was appreciated by all. The bright and vibrant costumes, dialogues and acting enthralled each and every one.
Lyons House first presented the story of ‘Satyavaan and Savitri’. This was followed by Howard House, who enacted the story of ‘Akbar and Birbal’. Birbal’s boundless wit astounded one and all.
Khanna House then showcased its colourful play ‘Ganga’ and last but not the least was Gardner House, who enacted an episode of ‘Tenali Raman’.
The performances were judged by Principal VR Gardner and Vice Principal M Gardner. The judges were highly impressed with the quality of plays enacted. The Principal appreciated the efforts of the students, and gave valuable tips on the use of stage, props and movements of the cast on stage to generate a greater impact.
The results were: Gardner House – First Position; Lyons House -Second Position; Khanna House – Third Position; and Howard House – Fourth Position.

Garhwal Post has established itself as a credible, balanced and forward looking newspaper in India. Based in Uttarakhand, the daily is read by the aware, socially and culturally responsible, high-income elite of society.
Contact us: info@garhwalpost.in
black dating website free