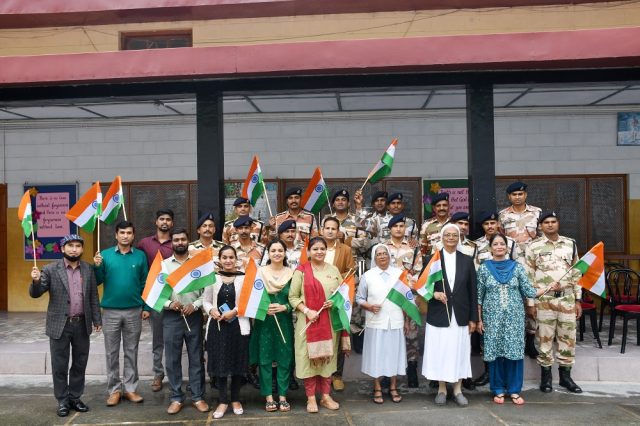 MUSSOORIE, 11 Aug: IndoTibetan Border Police Academy, Mussoorie, on the completion of 75 years of independence of India, is also celebrating the Amrit Festival of Independence with the rest of the country and as part of the Mahotsav, various programmes are being organised by ITBP. Under the guidance of PS Dangwal, Inspector General/ Director, MTCP Academy, to make citizens and children aware under the Har Ghar Tiranga programme, 800 tricolour flags were distributed to children and school staff at CJM Hampton Court School, Mussoorie by the ITBP Mussoorie.

On this occasion, Chhabindra Kumar Sethi, Assistant Commandant appealed to the children and school staff to hoist the national flag in their homes from August 13 to 15 and made them aware about environmental protection and made them also aware about the Indian Flag Code 2002 and 2022. Other senior officers of the Indo-Tibetan Border Police Academy were also present in the event. On this occasion, various types of national songs were played by the ITBP Band consisting of Indo-Tibetan Border Police Academy officials. This was done to inculcate the feeling of patriotism among the children. In this programme, all the children carried the tricolour flag and raised slogans “Bharat Mata ki Jai” and “Jai Hind”. Chhabindra Kumar Sethi, Assistant Commandant also briefed the children about the objectives of the Har Ghar Tiranga campaign and how to keep the flag safe & dispose off the flag in case damaged/ torn off under flag code of India guidelines /rules 2022 issued by the Government of India.