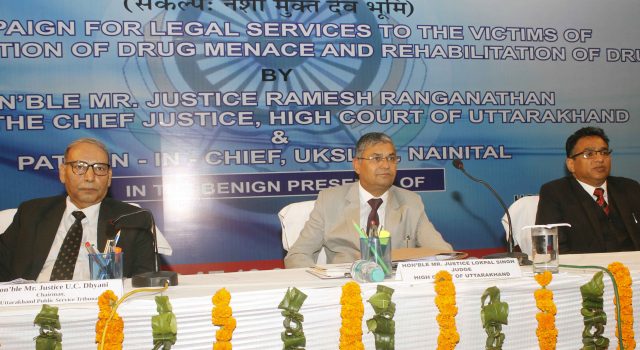 DEHRADUN, 28 Sep: Justice Ramesh Ranganathan, Chief Justice of Uttarakhand High Court today expressed deep concern over rising drugsmenace in the country and also asserted that Uttarakhand was becoming a hub for drug smuggling. He was speaking as the chief guest while launching the “Sankalp Nasha Mukti Dev Bhoomi Abhiyan”, a de- addiction campaign at MN Ghosh Auditorium here today. He added that addiction to intoxication of all forms had assumed very serious proportion in Uttarakhand.Citing a recent report of Union Ministry of Social Justice, he added that about 40 percent of the population in the country consumed alcohol while the trend of consuming drugs including cannabis and heroin was on the rise. Justice Ranganathan called for a collective effort from the government, the judiciary and the society to deal with the problem. He said that serious and sincere efforts at many levels would be required to make the people come out of the addiction and they ought to include medical, spiritual, religious, psychological means of interventions. Asserting that the drug addicts were suffering and an intensive campaign was required in Uttarakhand to help the drug consumers to overcome the addiction. Citing a recent report of the Union Ministry of Social Justice, he reminded the gathering that 40 percent of the people in the country consumed alcohol, while the trend of consuming drugs like cannabis was rising sharply among the youth. Uttarakhand was becoming a hub of drugs supply, which was highly worrying, he asserted. He said that large number of people consumed alcohol while over 6 percent of youth consumed drugs through injections and that the situation in Nainital, Almora, Udham Singh Nagar and Dehradun was very serious. Justice Ranganathan added that seventy percent of the addicts in Uttarakhand were from the weaker sections of the society and therefore the government would have to step in to rehabilitate them and help them get rid of the drug addiction. Justice Sudhanshu Dhulia, High Court of Uttarakhand and executive chairman of Uttarakhand State Legal Service Authority quoted a recent international report and said that that intoxication ‘business’ had become the world’s third largest trade after petroleum and weapons. Justice Dhulia added that 11 out of every 15 addicts dreamt of overcoming the addiction. He also pointed out that Uttarakhand ranked sixteenth or seventeenth in the country in terms of scale of drugs smuggling and consumption. The victims were increasing here. He felt that the country did not have such strong laws which could help nab real kingpins of the drugs trade and big drug smugglers who were very powerful persons. Powerful people needed to be attacked if the problem had to be tackled with sincerity as they were enemies of the society. Strong steps had to be taken towards this, he asserted. Justice Lokpal Singh, also from Uttarakhand High Court pointed out that the rate of the conviction in the country for drugs related offences was low and he felt that the police investigations were carried in a mechanical manner in such cases and this resulted in many guilty escaping the punishment. He called upon the Police to improve their investigation and homework in respect of such cases. Justice UC Dhyani, Retired Judge of High Court of Uttarakhand shared finer details of the Narcotics, Drugs and Psychotropic Substances (NDPS) Act 1985 while Dr GK Sharma, member secretary of Uttarakhand State Legal Services Authority pointed out the usual deficiencies in the police investigations related to the NDPS offences and called upon them to be truthful so that the rate of conviction could be raised. In the post lunch session, Dr Vandana Gambhir Chopra, Assistant Professor of Psychology in Delhi University and an expert on the subject said that it would be wrong to assume that victims of drugs abuse lacked will to overcome the addiction but they needed a whole support system to make them overcome the addiction. Chief Secretary Utpal Kumar Singh, DGP Anil Raturi, Neha Kushawaha, Civil Judge (Senior Division)/Secretary, District Legal Services Authority, Senior Police Officers and law students from various law colleges were among those who were present on the occasion.