Kal Bhist is an example of a folktale that highlights shared experiences of a group of people. The central conflict here is embedded in the day to life of ordinary mountain folks. Here the problem of a young adult unfolds as he begins by not caring for group values and ends up with good being triumphant under the influence of a Guru 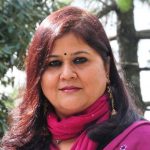 Amongst the most delightful and quaint places in Kumaon is Binsar. In its thick jungles lived a man called Kalu Kotadi. This was a name given to him by the villagers. His real name was Kal Bhist.

Kal Bhist was out of the common, strapping man, who was known far and wide in the mountains as one hell of a quaint and freakish individual.

He along with his bosom buddies and kinsmen would wander in the jungles along with their cattle. They would take them wherever there was abundance of pasturage.

During their wanderings in the jungles the group would often encounter ferocious animals. But they were never scared. Sitting alongside trees Kal Bhist would love to interact with these predatory animals. He would gawk at them with a peculiar kind of challenge in his eyes. His cousins were fed up of this habit of his that provoked the most savage of beasts.

Whenever they would persuade him to return home with the cattle, he would want to stay longer and would invariably suggest, “Lets cut and carry some wood as well.”

He would then begin cutting huge trees. No amount of persuasion worked on him. The buddies and kinsmen were always fearful of leaving Kal Bhist behind in the middle of danger, but invariably their patience would give way.

And adamantly Kal Bhist would return only when it became pitch dark.

Once when Kal Bhist refused to listen to his buddies and kinsmen during their sojourns, they hatched a plan. They decided to exterminate him. They were in good number and so attacked Kal, executed him and buried him after digging a huge ditch. Thereafter they quietly returned to their respective homes.

When Kal did not return till late at night, his mother became restless with worry. Overwrought she remained awake the entire night, and just before daybreak dozed off and began to dream.

In her dream appeared her son Kal Bhist. He began speaking to her, “Mother I am dead. Nourished by your milk I had acquired a huge and healthy body. Once again I want to feed on your milk, so that I return to life.”

The mother did just that and the moment she fed him her milk in her dream, Kalu Kotadi arose from the dead.

He now stood amidst huge trees, which threw huge dark shadows. But Kal was unafraid. He saw that in this absence his cows, buffaloes, were all woebegone. The moment they sighted him their faces lit up. Some began striking the ground with their hooves, while others began rolling in the mud in excitement. The cats began meowing as if reprimanding him, “Where were you hiding for so long. Why did you leave us all alone in this terrible jungle?”

Kal was delighted to see how these four-legged creatures were more loving and loyal than his two-legged human associations. He sat with them and caressed and petted them and then proceeded homewards.

There was mayhem in the village, the moment Kal Bhist was espied. The buddies and kinsmen especially were dumbstruck. The man who they had killed and buried was standing alive and tall before their eyes. They were stunned into silence and went into hiding, and could not believe that the man they had killed had come back to life.

Enraged Kal Bhist dared his enemies to confront him. All were well acquainted with his volatile temper. The villagers knew too well that Kal Bhist tolerated no injustice against his own self and would not rest until he destroyed his adversaries. This was not the first time he was raising his voice against foulness.

Guru Gorakhnath too was well aware of Kal Bhist’s temper. Learning about Kal Bhist’s return he too arrived at his homestead. At that time Kal Bhist was not home. His mother was shocked to see Guru. “My son cannot tolerate the sight of mendicants. He kills them the moment he sights them. Please leave the house immediately before he sets eyes on you,” the mother warned.

If he has killed many devotees, he can kill me too. I do not care.  If it is written in my destiny to be killed at the hands of Kal Bhist then so be it.  Guru then sat on the wall of Kal Bhist’s house and waited for him to return.

It soon became dark and Kal Bhist did not return. Kal’s mother sat greatly worried, thinking about the fate that would befall the Sadhu when her son would return. She was sure, the moment her son would severe Guru Gorakhnath’s head, her breath would vamoose. She looked at the Guru again and again and became all the more fearful. “There is still time. Please go away before Kal arrive. Save yourself. He will kill you!” But Guru looked at her in silence. His face was composed and tranquil.

Then all of a sudden Kal returned. Seeing Guru seated on his wall he was infuriated beyond control. His eyes became bloodshot. He picked up his axe in raze. His cattle immediately moved and stood in safe corners sensing something amiss. “Guru you are sitting here on my wall and waiting for certain death,” Kal Bhist roared like a lion.

Guru remained as calm as the smoothest waters, and did not in the least bit look agitated. Instead he smiled and blew Sacred Ash at him.

“It seems you are visiting this village for the first time? Wait for me here. Let me tie my cattle in their respective sheds and then I will see you,” stated Kal Bhist.

So saying he moved towards the cattle sheds in anger. But today it became very difficult for him to tie the animals. The harder he tried the easier it became for the animals to let themselves loose. Unlike on other days, today they were calm and peaceful and waited for their turn to be tied. Kal Bhist took great pains and struggled to harness his animals, but in vain. By this time his anger too subsided and he ended up being tired both mentally and physically.

Kal Bhist was shocked to see his animals so calm.

Seeing his plight Guru Gorakhnath smiled and said,” Kal Bhist you are fatigued and worn out. I am lucky that you have no energy left to kill me.”

“Yes, you are right. I was certain I wanted to kill you,” Kal Bhist replied composedly.

“O, then you will not kill me,” stated the Guru.

“Why are you lamenting the fact?” Kal Bhist questioned ever so serenely.

“I am sad that you are unable to kill the one who wants death, and those who do not want to die you keep killing mercilessly,” Guru Gorakhnath averred. I want to remain alive till such time that I remain forgetful of my death wish.”

“Alright, I have changed my mind now. Ask whatever you desire and I will provide it to you,” stated Kal Bhist.

“Give me a barrel full of milk if you can, of these animals that you love so much,” Guru Gorakhnath replied.

“That’s not a big demand. Come to mother and take whatever amount you want,” Kal Bhist responded.

Seeing the Guru and her son return amicably, the mother could not believe her eyes. She now understood that mendicant was no ordinary man who could change her son’s heart so dramatically.

Kal’s mother went inside her hutment and returned with a pitcher of curd, and placed it before Guru Gorakhnath. She then went in again and again and brought more curd to fill the vessel to the brim. But the vessel remained half full each time she endeavored to fill it.

Now she was certain that this Sadhu with superhuman abilities was a perfect man or a Sidh Purush. She prostrated before him and folded her hands in veneration. Guru Gorakhnath responded by embracing Kal Bhist and announced that henceforth he would be amongst his most favored disciple.

Ever since Kal Bhist is highly regarded by the folks of Kumaon as their guardian angel. Under his Guru’s influence he gained remarkable, high-caliber attributes that endeared him amongst his folks.

Garhwal Post has established itself as a credible, balanced and forward looking newspaper in India. Based in Uttarakhand, the daily is read by the aware, socially and culturally responsible, high-income elite of society.
Contact us: info@garhwalpost.in
dating app clone for sale free online black dating websites dating sites donegal