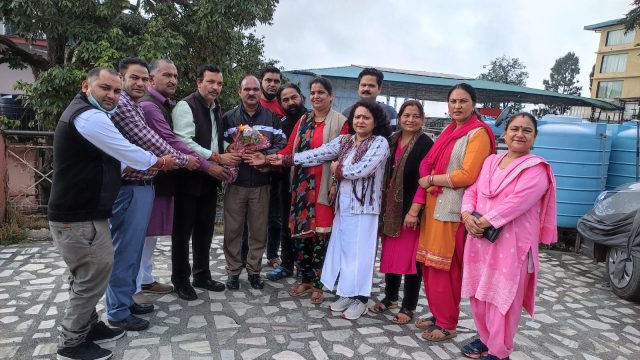 By Our Staff Reporter
Mussoorie, 6 Oct: General Secretary of Mussoorie BJP unit Kushal Singh Rana has been nominated as a member of the Khadi Village Industries Board. Activists of Mussoorie BJP, Mahila Morcha, Yuva Morcha under the leadership of Mohan Patwal welcomed Kushal Singh Rana with flowers and wished him a bright future, here, today.
Mussoorie BJP President Patwal said that Kushal Singh Rana always worked to take the party’s policy to the people. He had also contributed significantly to strengthening the party.
Kushal Singh Rana expressed his gratitude to Chief Minister Pushkar Singh Dhami and Cabinet Minister Ganesh Joshi for being nominated as a member of the Khadi Village Industries Board. He said that he had worked for the party with honesty and integrity, as a result of which the party had given him respect, for which he is grateful. He promised to discharge the responsibility given by the party with honesty and integrity.
Present on this occasion were Mohan Petwal, Mahila Morcha President Pushpa Padiar, Yuva Morcha President Amit Panwar, Ashish Joshi, Sapna Sharma, Chandrakala Sayana, Arvind Semwal, Anita Pundir, Rakesh Agarwal, Sita Panwar, Trilok Rana, Guddi Devi, Sunita Dabral, etc.

Garhwal Post has established itself as a credible, balanced and forward looking newspaper in India. Based in Uttarakhand, the daily is read by the aware, socially and culturally responsible, high-income elite of society.
Contact us: info@garhwalpost.in
best straight dating app cheap save the dates