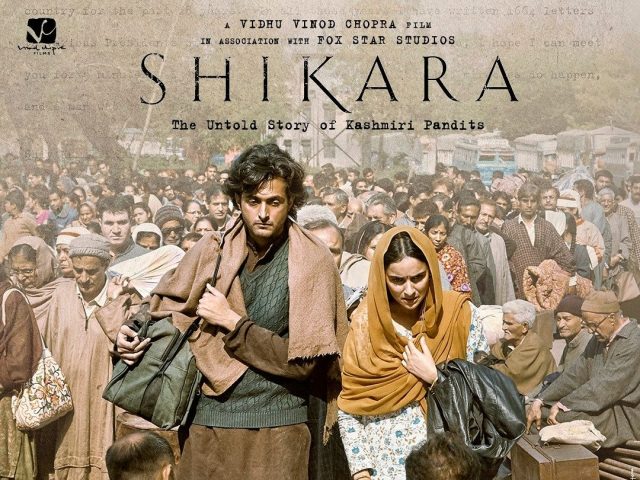 Kashmir, with its multiple definitions and varying interpretations in our imagination – right from a land so majestically beautiful that even the gods are jealous of it, to a deadly conflict-ridden zone – has perpetually managed to arrest the attention of writers, poets, scholars, artists, and film-makers. Vidhu Vinod Chopra, director, producer, and co-writer of Shikara, having personally experienced his family’s exodus from the Kashmir valley, also brings a distinctive first-hand perspective to this film, which is a firm rejoinder to the act of forgetting.
Shikara dwells on the life-changing event experienced by lakhs of Kashmiri Pandits when they were forced to flee the valley due to interference by militant groups in 1989-90. The agony of being a refugee in one’s own country is worse than any other suffering. Vidhu has been working on the film for last 12 years as it required significant research, as claimed by him in one of his interviews. It’s a tribute to his mother and is described as ‘a love letter from Kashmir’. But he does not review the complexities and events that lead to this; chooses to play safe.
The three writers, Rahul Pandita, Abhijat Joshi and Vidhu have worked towards the story of Shikara comprising pain, betrayal, fear and the most dreadful experience of being deprived of one’s home. Shikara is a fair mix of reality and fiction focusing on a love story against the mass uprooting of the Kashmiri pandits as backdrop, running over a wide band of emotions, vast range of experiences; happy lives losing their language, identity and heritage and yet missing on the rage and anger the characters were expected to depict.
The narrative begins in 1987 with a budding romantic love story in the picturesque paradisiacal Kashmir between Shanti (Sadia) and Shiv Kumar, a poet (Aadil Khan), finally culminating into marriage. An overblown thought of fundamentalism hits their life. The mass inferno of hatred engulfs them in its blaze, devastating them. They have to leave, lifelessly, leaving behind all their attachments, carrying only the reminiscence of memories, soaked in fear and helplessness. There were so many others like them. Many lost their loved ones, were forced to flee and lead a dreadful life in refugee camps where even a tomato was a luxury. All good things fade in Shiva-Shanti’s life. They still manage to keep their love alive, their bond sturdy as they age in the trying circumstances.
A film maker is a story teller and he has every right to choose his perspective. Vidhu wants to be free from harm. He perceptively avoids agitating the political circle. So much water has passed under the bridge since then. The recent political events in Kashmir, its status-change and how it remained disconnected from outside world for months; Kashmir has seen so much. Vidhu’s theme and solution comes in one line – ‘to hate is to love’ and a hope in the heart to return home one day. The untold story intentionally chooses not to dwell into the root cause, concentrating more on the emotional trauma.
Shikara slows down after the interval and its ending is predictable. It has visually rich moments. The newcomers have done a pretty good job. The refugee camp scenes look genuine. Rangarajan Ramabadran’s breath-taking cinematography; soulful songs resonating the desired feelings and Shikhar Mishra’s smart editing – all enhance the movie experience on the big screen. The maestro musician, AR Rahman’s background score flows like poetry, enhancing, echoing and addressing each and every emotion.
It is a pathetic plight for those who experienced this phase. From a place with sprawling bungalows/shikaras, abundant resources, and limitless affability, where residents hadn’t known the sting of scarcity or even the fatigue of heat down in the plains, Kashmiri Pandits were forced to a permanent exile, an irreversible refugee status, when compelled to leave the valley. Rahul Pandita, author of bestseller Our Moon has Blood Clots and co-writer of the film, livens up the insufferable comparison when he says, “I remembered our kitchen garden back home in Srinagar, and all the tomatoes I had wasted, plucking them before they could ripen and hitting them for sixes with my willow bat”, to the times when the turgid smell of despair emanated from the people who waited for their turns outside latrines, taps, trucks supplying essentials, officials allocating them tents in refugee camps – when even anaemic tomatoes were cut in halves by a rusty knife before being handed out since there weren’t enough for all. To be in that suffocating moment is a huge exasperating setback for anyone.