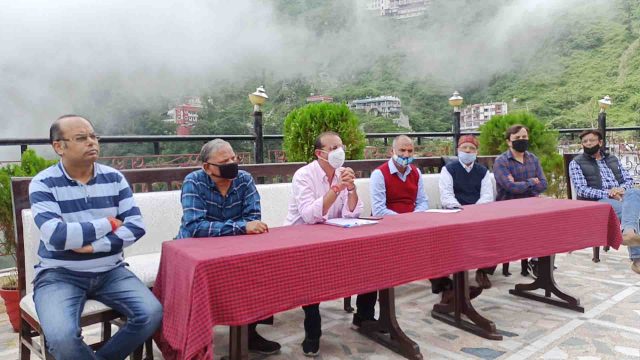 By Our Staff Reporter
Mussoorie, 26 Aug: The presidents of Uttarakhand Hotel and Restaurant Association, Uttarakhand Taxi Maxi Association and Mussoorie Traders and Welfare Association jointly held a press conference at a local hotel expressing concern at the plight of the tourism business in the state. They said that, if the government does not take concrete steps to revive the tourism industry, all the associations associated with the tourism business of the state would be forced to agitate against the state government.
State President of Uttarakhand Hotel and Restaurant Association Sandeep Sahni said that the tourism business of the state has come to a complete halt during the Corona period. At the same time, 30 percent of the restaurants and 15 percent of hotels in the state had reached the verge of closure. The government had not a clear policy regarding the tourism business. He recalled that it took almost five years for tourism to recover after the disaster of 2013. Almost 50 percent of the people are connected with the tourism business in the state.
Sandeep Sahni said the economic package announced by the PM was not visible on the ground. Guidelines related to tourism were not clear. The establishments were closed during the Corona period, but electricity, water and telephone bills were coming as before, no exemption of any kind had been given.
He said the 3 month electricity fixed charge waiver by the government should be extended to March 2021. Similar relaxation was needed for water and sewerage bills. Working capital loans were also needed on which interest up to 2 years needed to be waived. Fifty percent of salary to employees ought to be paid by government through ESI. Tourists were being allowed to come to tourist sites only after the RTPS corona test, which cost Rs 2500 per person. Government should bear the cost of this test.
State President of Uttarakhand Taxi Maxi Association Sundar Singh Panwar said that three months of road tax had been waived and Rs 1000 relief provided to commercial drivers, which amounted to almost nothing. He sought Rs 5000 per driver, with exemption of 2 years’ road tax.
President of the Mussoorie Traders’ and Welfare Association, Rajat Aggarwal said tourism depended on the central, state and local governments. If the three jointly do not formulate a concrete policy to run the tourism business, then the situation would become worse. He said that a year’s exemption should be given by Mussoorie Municipality on house tax and other taxes. The government was helping hotel staff by providing ration and finance, but no one was thinking about the middle class and small shopkeepers, which was most affected by Corona.
Rajat Aggarwal said government should provide medical insurance to small shopkeepers along with interest-free loan under the Mudra scheme. Present on the occasion were Jagjit Kukreja, Tanmeet Singh, Deepak Gupta, Ramkumar Goyal, Rippi Khurana, Abhishek Hari, RN Mathur, Naresh Vachhani and Amit Vaish.