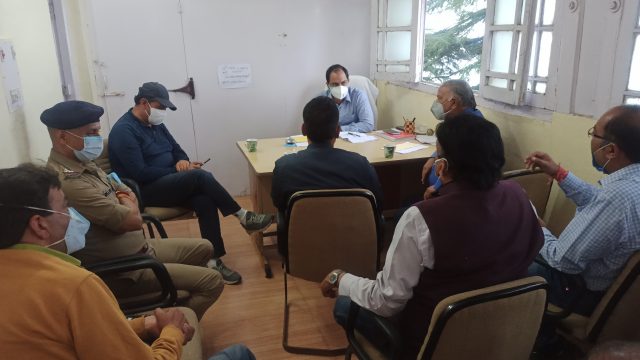 By Our Staff Reporter
Mussoorie, 24 Jun: In view of a possible third Covid wave, preparations have been launched, here, for which a meeting was held jointly by Mussoorie SDM Manish Kumar with the Mussoorie Hotel Association, Mussoorie Traders’ Welfare Association and Police at his office, today. People were urged at the meeting to motivate as many persons as they can at their own level to get vaccinated.
SDM Kumar said that additional vaccine centers have been opened in Mussoorie, where arrangements have been made to administer the vaccine to 700 people daily. Taking lessons from the loss of lives in the second wave, an action plan is being prepared by the government and the administration to deal with the third wave. The District Magistrate had asked all SDMs to increase vaccination levels. All the stakeholders of Mussoorie had been called and their problems and suggestions discussed. Instructions have also been given to the police to prepare an action plan to get rid of traffic jams.
State President of the Uttarakhand Hotel Association, Sandeep Sahni said that Tourism had to be operated by following the rules issued by the government. He said that tourists come to the hill areas the most on weekends. If the markets are closed on weekends, it would cause a loss to business, while tourists would also be upset.
Rajat Agarwal, President of Mussoorie Traders’ Welfare Association, said that business is being affected due to the rules issued by the government. The traders are upset and are hoping they will get concessions in the rules on 28 June. He said that vaccinations in Mussoorie would be expedited and, hopefully, by the end of July, 99 percent of the people in Mussoorie would have been vaccinated. He said that special vigil is also being kept on the tourists coming from outside.
Present on this occasion were Mussoorie police station in-charge Rajeev Rauthan, Mussoorie Hotel Association President RN Mathur, Sanjay Aggarwal, Rajat Agarwal, Jagjit Kukreja, Nagendra Uniyal, Salim Ahmed, Shailendra Karnwal, Mussoorie Homestay Association President Devi Godiyal, Mussoorie Company Garden Committee President Surendra Rana and others.

Garhwal Post has established itself as a credible, balanced and forward looking newspaper in India. Based in Uttarakhand, the daily is read by the aware, socially and culturally responsible, high-income elite of society.
Contact us: info@garhwalpost.in
hook up sites in accra over 40s dating