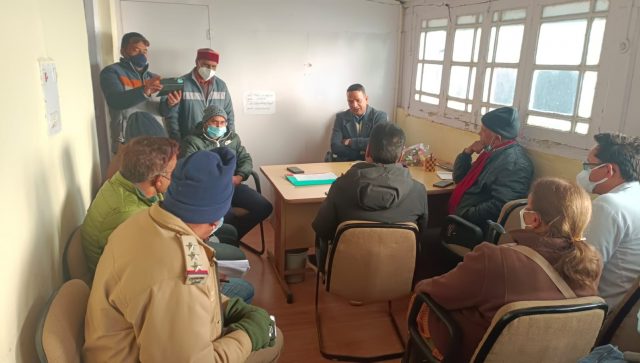 By Sunil Sonker
Mussoorie, 2 Jan: SDM, Mussoorie, Naresh Chandra Durgapal held a meeting with officials of the Mussoorie Hotel Association, Education Department, Police, Health Department and other institutions at his office and urged everyone to follow the Corona protocols.
He said that, from 3 January, work on vaccinating those between 15 and 18 years would begin in Mussoorie. To begin with every day about 100 youngsters would be vaccinated, for which all preparations have been completed. All officers concerned have been instructed to work in coordination with each other so that there aren’t any problems in the vaccination drive. He claimed the the government is fully alert about the new variant of Omicron, and people are being urged to ensure their 15 to 18-year-olds are vaccinated. He urged everyone to follow the rules issued by the government regarding Corona. He warned that action would be taken against those who violate the rules. He also directed Mussoorie Police Incharge Girish Chand Sharma to enforce social distancing and wearing of masks.
Present on the occasion were Executive Officer Ashutosh Sati, Mussoorie Hotel Association President Sanjay Aggarwal, Sandeep Sahni, Ajay Bhargav, RN Mathur and many others.