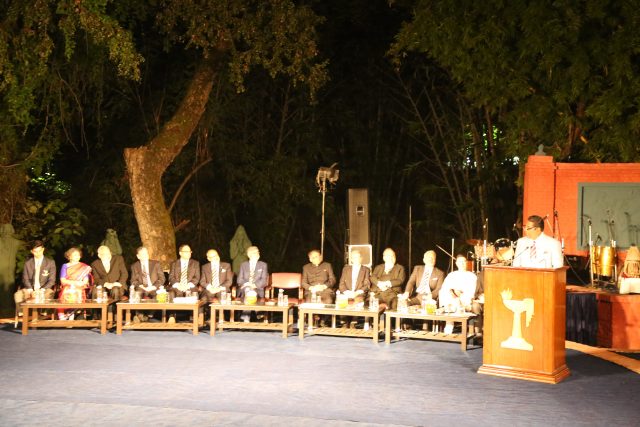 DEHRADUN, 19 Oct: International Tennis star Vijay Amritraj said here today that to be successful in any field, the 5- D mantra of Desire, Discipline, Dedication, Determination and Divine Intervention must be followed.” These elements are essential for anyone to achieve success in any sphere”, said the tennis champ who brought great laurels to the country in the 1970s and 1980s. He was speaking as the Chief Guest at the 84th Founder’s Day at The Doon School this evening. Addressing teachers, students, old students, parents and guests at the Rose Bowl auditorium of the school, the tennis star said that when he was a child, he had no stamina, was sickly and not good at studies. His parents, specially his mother, made all efforts to ensure that he never gave up and made him become a fighter who could get anything he wished for in life. “The word ‘can’t’ did not exist in our home. Nothing was ever considered impossible.I believe that my greatest talent was being born to the right parents. Despite her two near- fatal accidents, my mother kept making me pursue my dream of becoming the best tennis player in the country”, he said, fondly remembering his childhood and his family. “Although my grandmother always used to ask me why I had to so far off to lose!. Till today, I do not have an answer to that”, he said with a smile. He said that he had kept learning each day of his life and had come to the conclusion that each one of us should try to improve ourselves every day. “Each individual has something special and must try to find what that is. After I stopped playing tennis, I enjoyed working as a TV presenter and commentator. Then I even got a chance to act in films like Octopussy. I did TV shows and had even a talk show all of my own where I invited people of my own choice from different walks of life”. He said that all these various fields he was engaged in made him learn a lot. “When I was made an ambassador of peace by the United nations, I visited places hit by calamities and when I saw life in its most real form, I realized what it was to serve people”. He said life had given him the opportunity to meet and spend time with Mother Teresa, Pope John Paul and Nelson Mandela, “How they inspired me I cannot even express”. He said that the only way to avoid defeat was to work harder each day. “It is true that the harder you work, the luckier you get”. He said that in his 22 year long career as a tennis player, he had felt very proud to be representing India in various parts of the world. Indians settled abroad came to cheer me and support me. It was the greatest feeling”. Amritraj expressed joy at being at The Doon School. “I cannot believe that I am at The Doon School. This is a very special place indeed! Whatever I had heard from people about it does not match up with what I found it. The school is preparing you all to become leaders of the world. Aim high, dream big and shoot for the stars“, he told the young students. He said that sport for him was his life. “It has been my greatest education, it has taught me about myself, about life, about people, about this world. Being a sportsman has indeed made me understand everything in a much better and clearer manner. I can say that Davis Cup has been the be-all and end-all for me. At one time, London, Wimbledon—it was all a distant dream. But with the support and confidence of our family, we went there – my brother and I – and played!” He repeatedly said that if one was determined and confident, one could achieve what seemed impossible. “Failures can teach us a lot. We must learn from every failure, each defeat”. Amritraj has been at the school since yesterday and spent a lot of time with students, teachers parents and many old boys who were at the school to attend the Founder’s Day celebrations which concluded this evening.