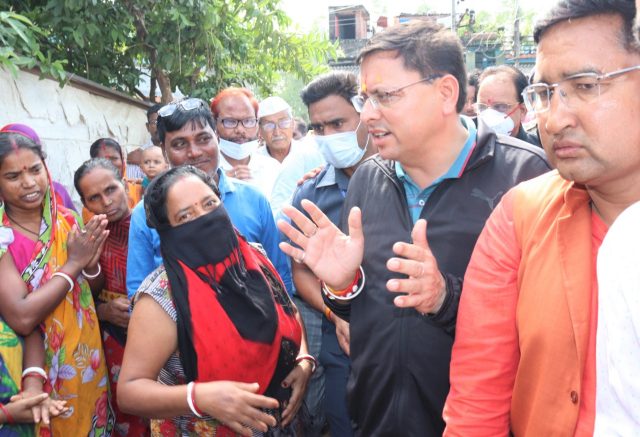 DEHRADUN, 20 Oct: Chief Minister, Pushkar Singh Dhami, has been on his toes during past two days after the disaster struck several parts of the state, due to excessive rains. He has been constantly touring all the disaster affected areas across the state, besides chairing the meetings in this regard and announcing compensation to the kin of the deceased. Dhami visited the disaster affected areas in the district in Udham Singh Nagar today. He reached these areas riding on a tractor and took stock of the damage. 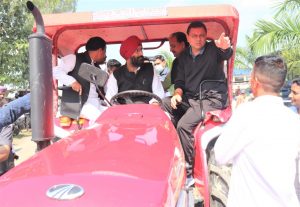 He along with Union Minister of State for Defence, Ajay Bhatt and Cabinet Minister Dhan Singh Rawat, visited the flood affected areas from Nanak Sagar to Pratappur, Nausar Badhiya, Bhojpuri and Pratappur areas of the district. During past two days, Dhami was constantly present amongst the people, walking, even riding tractors where it was not possible to walk or commute in car, in a raincoat and being with the victims of the disaster. He has been taking stock of the entire situation and of the rescue work, and has been speaking to the disaster affected people. He had been on a hectic three day tour ever since the tragedy struck. When the Chief Minister’s helicopter could not take off from Haldwani today due to inclement weather, without wasting time, he left for the affected areas by road. Inspired by the Chief Minister himself, the entire government machinery is in active mode round the clock. Certainly it would be a feeling of some relief for the disaster affected people to find the CM in their midst. After this, Chief Minister Pushkar Singh Dhami went to Ramgarh area of Bhawali and took stock of the postdisaster situation and relief and rescue operations. On Tuesday, he had begun his stormy tour by visiting the affected places of Garhwal division and most of the day, he was seen visiting the disaster affected areas of Kumaon region and leading the rescue operation himself. He held a ‘Janata Darbar’ in Haldwani on Wednesday morning and listened to the problems of the local people. Most of the problems were resolved ‘on the spot’. Strict instructions have been given to the officials to extend all possible help to the people affected by the disaster. After the Janata Darbar, the Chief Minister left for the affected areas, but his helicopter could not take off in Haldwani. The Chief Minister left by road only. He extensively toured Rudrapur, Kashipur, Haldwani and all the surrounding areas. Dhami also reached Khatima’s flood-hit Pratappur and Nausar by tractor to know the condition of the flood victims, and interacted with the farmers. He told the farmers that all possible cooperation would be given by the government. He met the shopkeepers near the railway consignment located on Melaghat road in Khatima and inquired about their condition. Thereafter he met the local people at Pakdiya, located on Melaghat Road. He consoled the 3 people who had lost their homes and crops. The Chief Minister has directed the officers to assess the damage caused by the disaster at the earliest, and give proper compensation to the affected. He also directed that arrangements be made for accommodation and food for those who have become homeless. The district magistrates have been asked to take over the command of rescue and relief operations and be updated on its progress every hour. After Khatima, the Chief Minister took the details of the damage caused in the areas hit by excessive rains after conducting aerial and onsite inspection of the disaster-prone areas of Champawat and Talla Ramgarh and aerial inspection of Bhikiyasain. A major accident was averted, when Chief Minister Dhami was on a visit to the flood prone area in Pratappur-Nosar area of Khatima. During this visit, one vehicle thay was part of the CM’s fleet slipped off the road and got washed away in the flooded water. However, the local villagers who were present on the spot at the time of this incident, somehow rescued the police personnel sitting in the vehicle, by getting them out of the water. Fortunately, all the policemen present in the car were rescued safely.