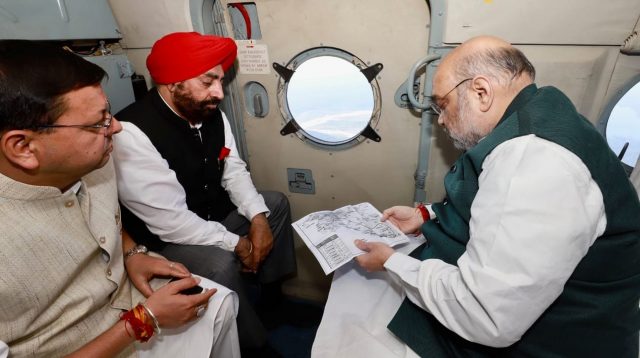 By Arun Pratap Singh
Dehradun, 21 Oct: Union Home Minister Amit Shah conducted an aerial survey of disaster hit areas of Uttarakhand, particularly in the Kumaon division. He was accompanied by Governor Lt Gen Gurmit Singh (Retd), Chief Minister Pushkar Singh Dhami and Union Minister of State Ajay Bhatt during the aerial survey. After the survey, he also chaired a high-level meeting with top government representatives and the officials at Jolly Grant Airport and also briefed the media. While no immediate relief or package was announced by Shah during the meeting or during his visit to the state, Shah said that the Centre would provide a relief package to the state to help it recover from the losses that it had suffered from. The officials had been directed to send a detailed report to the Centre after due assessment of the losses. A central team would also visit the state in the next few days to assess the losses.
Earlier, Shah held a meeting with central and state government officials. He sought updates on the disaster and relief and rescue operations. Shah appeared to be satisfied with the efforts of the state government on ensuring timely relief and rescue operations.
In the media briefing, Shah claimed that the government of CM Pushkar Singh Dhami acted in timely fashion and done commendable work related to rescue, relief and evacuation operations. It may be recalled that the CM had been active over the past three days, leading the relief operations and monitoring the relief work.
During the media interaction, Shah also claimed that due to the timely rainfall alert, the extent of the damage was controlled significantly. He claimed that due to the warning given by the Government of India 24 hours in advance, there had been less damage due to the disaster. Due to the alert, the Central and the state disaster management machinery was prepared to deal with the situation. Messages were also sent on time to most of mobile users. Due to this, the number of casualties was reduced. The Union Home Minister said that all the agencies of the Central and State Government had become active. The Army, NDRF, ITBP, SDRF, police and fire brigade were involved in relief work in time. He reminded the media that there had been no tourist casualty, so far, due to heavy rains in Uttarakhand. More than 3500 people were rescued and more than 16,000 precautionary evacuations were carried out. As many as 17 NDRF teams, 7 SDRF teams, 15 companies of PAC, more than 5000 police personnel had been deployed to carry out the relief, rescue and evacuation work.
Amit Shah also disclosed that a special institution would be set up for timely information and handling of disasters in the near future. He added that, soon, a team of the Union Home Ministry would come to Uttarakhand and assess the damage caused by the disaster which would then be reported to the Centre. The Union Government had granted an amount of Rs 250 crores to the state in advance some time ago under the disaster management head, and this could be utilised for relief work. Further assistance would be given after the assessment of the losses.
Shah said that, so far, 64 people had died in the disaster. Eleven people were still missing. The search for these people and providing relief to the affected was continuing in full swing. Things were getting back to normal.
The Union Home Minister pointed out that, except for three roads in Nainital, Haldwani and Almora, traffic movement had been allowed on the remaining ones. He said that, at some places, the roads were broken up to more than 25 metres in length. It would take some time to fix them. He said that electricity and water had been restored in all the disaster-affected areas.
Shah also said that the Joint Secretary of the Home Department would be deputed to Uttarakhand for some time. During his stay here, he would also inspect the disaster and relief rescue operations.The Centre would assist Uttarakhand in every possible way.
It may be recalled that Shah had arrived in Dehradun late last night to take stock of the disaster affected areas and to hold a review meeting in this regard. Uttarakhand had received record excessive rains over the past 3 days, creating flooding, landslides and the resultant loss of lives and property. Chief Minister Dhami had stated yesterday that the excessive rains in the state had caused losses and damages to the tune of Rs 7,000 crores and that restoring the road network, bridges and ensuring safety of the people was the top priority for the government.
In view of the improved weather conditions, the government has allowed the stranded pilgrims to proceed towards the Char Dham destinations of Kedarnath, Yamunotri, Gangotri and Badrinath. Badrinath route which was closed till last evening due to highway blockages had also opened up for traffic today. Maharashtra Governor Bhagat Singh Koshyari visited Badrinath today and offer prayers. Yesterday, he was in Kedarnath to have darshan and offer puja.