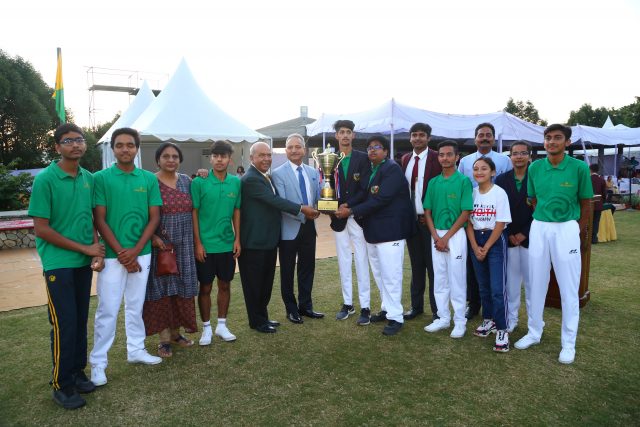 DEHRADUN, 23 Oct: Kasiga School held its Annual Athletics Meet on 22 October. The Chief Guest on the occasion was Major General GS Rawat, Deputy Commandant, IMA. The school also welcomed its founding family headed by Chairman Ramesh Batta, his wife Poonam Batta, the Director Finance and Administration, Siddharth Batta, and Director, Welfare, Chandni Batta, as also Head of School, Sonali Sinha, and the Deputy Head of Academics, Jose Tom, heads of other schools and a large number of parents. The day began with the exhibitions put up by various Academic Departments. The theme of the exhibition was “Water.” The Mathematics Department displayed a Mathematics Park, which had a variety of ‘Maths Trees’. The Science Department exhibited a series of models depicting water conservation, rain water harvesting, the water cycle, various greenhouse practices on maximising use of natural and man- made resources, etc. The Social Science Department displayed through maps, the concept of Hydro Politics. A Stress Bucket was also a creative way to display how toxicity needs to vent out. Seed bombs made of clay were a creative way to plant more seeds to maintain the ecological balance of Mother Earth. The Languages Department staged a Hindi street play regarding the paucity of water in the near future, while the English department, through a mime act, tried to create awareness on the need to preserve water for future generations. The Bird Watching club exhibited a variety of birds observed on campus and other places where the students went for excursions. The Creeya club exhibited working models of robotics and sensors. The Photography Club captured moments of still life. The Art Department displayed different types of paintings made by the students. The evening witnessed a matrix of sports activities. The athletics meet started with the Head Girl, Ishaana Kapoor, leading the March Past. The trophy for the March Past and PT display was won by Amazon House. The Overall Trophy for Athletics was won by Pacific House. In the sub Junior Boys’ category, Sambudda De won the Best Athlete Award. In the Junior Category, Kipa Mangjung was declared the best athlete, while Preeya Patel was awarded the best athlete award in the girls’ category. Garvit Margo won the best athlete trophy in the middle boys’ section, while Manya Jaiswal won in the girls’ category. Ishana Kapoor and Aman Goel won for the Senior Category. The Player of the Year award went to Aman Goel. Yazan Khan was awarded as the Best Player in basketball, Vishv Patel for cricket, Yash Agarwal for shooting, Kipa Mangjung and Aman Singh for soccer, Shreesh Bakshi and Preeya Patel for swimming, Dewang Maheshwari for table tennis, and Ishaana Kapoor and Abhinav Acharya for tennis. Chief Guest Major General GS Rawat, AVSM mentioned that it is pertinent to stay focused and motivated in life to achieve the goals that make us successful.