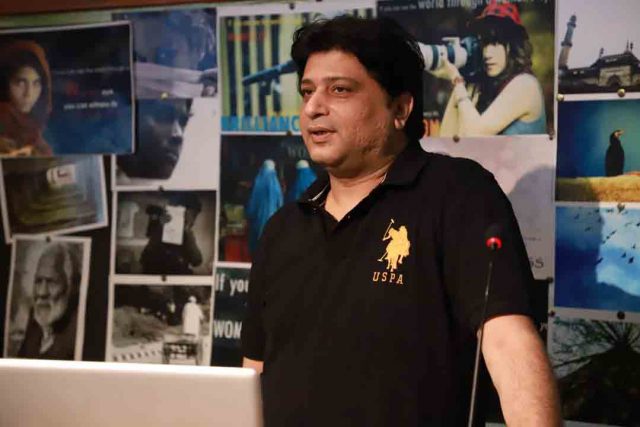 DEHRADUN, 20 Nov: Ashish Kaul is a leading media personality and has been part of almost the entire spectrum of media, be it books and magazines, or television or films, and even the corporate side of the media! He is currently associated with some prominent film production houses of Bollywood. He has authored two books – one in Hindi, titled “Refugee Camp”, which is an untold story of the genocide of Kashmiri Pandits in 1989 in the Kashmir Valley and their life following the tragedy. His second book, “Didda”, written in English, is the story of a disabled woman warrior from the valley. Didda was the one who despite having to face a huge struggle in her life went on to become a queen of Kashmir, who defeated the dreaded invader, Mahmud Ghaznavi, not once but twice. Kaul was recently in Doon to participate in the Valley of Words International Literature & Arts Festival, where his book Didda was also discussed and launched. He spoke to Garhwal Post on various subjects including the past, the present and future of Kashmir. Some excerpts.

You have been part of Bollywood for long. There have been several films which have shown the terrorism in the valley, such as ‘Mission Kashmir’ and ‘Haider’. However, only one perspective that is more or less sympathetic towards the Kashmiri extremists has been shown in most such films. Why are other narratives like the exodus of Kashmiri Pandits missing from these films?

You are right! Most films have depicted only one kind of perspective on Kashmir. I see several reasons behind this. One is the fact that, in the Kashmir Valley, Hindu Pandits have been a miniscule minority albeit the most literate community in the world. Secondly, in the years 1988, 1989 and 1990, they were mercilessly persecuted, massacred and pushed away from their native valley. History, language, religion and culture could not have mattered to them during their struggle for livelihood and shelter, post their exodus. For the ‘secular’ liberals and the media, they did not just matter! The Kashmiri Pandits became refugees in their own country and probably the only community that are called migrants in their own country. The liberals ignored the community and the media also did not present their perspective in the right context. Film makers believe in seeming politically correct and to sympathise with the extremists was just that to them.

We hear and read so much about a shared Kashmiri culture, called Kashmiriat, Sufism and Hindu-Muslim brotherhood in the valley that existed before the terrorism took over! What changed the harmonious social fabric of the valley?

If you go just a few centuries back in history, almost the entire Kashmir valley was Hindu. They were the most literate people. However, following the dominance of Afghan rulers for a significant period in the valley, Hindus were converted to Islam and a very big population that refused to convert was massacred. What is Dal Lake in Srinagar, today, was once a place where Hindus were massacred and buried in huge numbers during that period. One of the governors called Mohammed of the Afghan rulers had issued a 13 point charter of rules for Hindus in the valley. One such rule was forbidding the Hindus to even openly grieve the death of their family members. Another one was forbidding them to openly celebrate their festivals. After Independence, persecution of the Kashmiri Pandits started in 1956, itself. Pandits were ignored in government jobs, in admission to medical and engineering courses in the valley from that time itself. Hindu Pandit women were the subject of rape and they had to bear this. However, the Kashmiri Pandits still learnt to adapt and claim brotherhood purely out of submission. Let me tell you, frankly and truthfully, this so called claim of Kashmiriat and Sufism is a highly exaggerated narrative. In reality, things were not that harmonious. You see, some generations before, most of these Kashmiri Muslims were also Hindus. The DNA of the Pandits and the Kashmiri Muslims is the same. When they see us, they see their own past which they otherwise hate to see and admit!

So, in your opinion, historians have not been truthful regarding the history of India and Kashmir?

Hundreds of temples were demolished; most of the mosques and even Sufi mosques in the valley had been Hindu temples in the past. However, historians do not mention this! Not only this, most lanes and bylanes of Srinagar downtown have been constructed with the stones and bricks of demolished temples. Even the contemporary history of Kashmir as written and published is not truthful or honest. You know what the much touted Kashmir Land Reforms of the 1950s was all about? The so called land reform involved taking over the land of Kashmiri Pandits and giving them to the Muslims by way of lease and even freehold transfer of ownership to them. This was besides the unfair treatment and discrimination against them regarding government jobs and admission to the medical, engineering and other professional courses. Open discrimination existed which pushed many Pandits out of the valley even before the infamous massacre in 1989. A significant number of Pandits had already moved out of the valley before this because of the discrimination and this made the mass murder and massacre of the Pandits in 1989 that much easier. I am also a victim of that exodus. My own aunt and her entire family were openly murdered on the streets of Srinagar and their bodies lay there for hours because no one dared to pick them up and perform the last rites. Historians, most of whom belong to the secular liberal cabal, found it very convenient to just ignore the exodus.

What turned you into a writer?

I do not consider myself to be an author. I have had a professional career which was basically managerial responsibilities in different companies and even media companies. However, it was my objective to tell the world the truth behind the Kashmir issue, the realities and the struggles faced by the Kashmiri Pandits. That was also a reason why I wrote my first book in Hindi, “Refugee Camp”. I was once travelling to the Valley with my family. Those days, the flights took a larger round over Srinagar before landing. My daughter saw the town and surrounding area from the window of the plane and asked me why we were not living in this heaven and instead living in a metropolis like Mumbai! So, I felt it was necessary for me to tell the story behind the exodus of the Pandits and why and under which circumstances they were forced to leave the valley. Hence, this book came! I am also working on the script and the story will soon be seen in the form of a film! Then I thought that Kashmir had produced great warriors and personalities such as Didda, but the world did not know much about them. Hence the book on Didda got written.

Now that Article 370 is gone, what positive changes do you expect?

I am not very sure if the Pandits will be able to get back their ancestral properties, or even to buy fresh property in the valley in spite of the fact that Article 370 is history now! That is a big challenge and it is more of a political victory rather than an actual harbinger of positive change in the ground realities of the valley. However, let us see! In my opinion, I will only accept that things have actually changed when someone like you from Dehradun can go there and buy land in the valley and be able to live there peacefully.

What are your future plans?

Many things are in the channel. Let us see what works out!