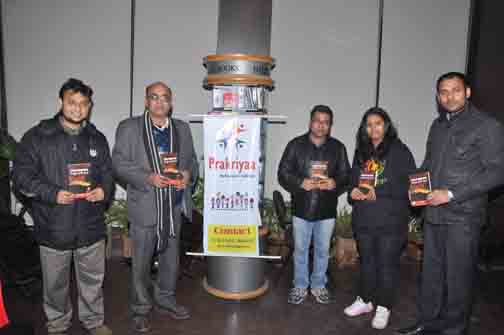 DEHRADUN, 19 Dec: A group of five individuals from diverse backgrounds, but with a strong belief in the power of learning and creating a culture of shared learning started an interesting reading club under the banner of Prakriyaa. All the five founding members hail from different career paths but share a common vision of a collaborative platform that brings people from various spaces together to create a more sensitive and compassionate world.
The founding members include Srinjoy Ghosh (Educator), Ritesh Datta (Educator), Rajni Nair (Educator), Vipin Pawar (IT specialist) and Kabir Ahluwalia (Public Relations).
One of Prakriyaa’s pioneering programme has been creating a platform for budding authors, writers and book lovers for sharing their literary works with a larger audience. This is not just any other book reading session but a programme that encourages dialogue and constructive criticism around the literary work being discussed. The initiative has so far conducted five book reading sessions and the next endeavour is to create a platform for artists, musicians and other creative mediums to share their work and experiences.
The most recent Book reading session was conducted in the serene environment of a Café located at Old Rajpur Road. The reading was conducted for an upcoming book “The Journey to the Next level” authored by Captain Kunal Uniyal. Excerpts from the book were read by the author which gave the audience a good opportunity to understand the challenges and mysteries of life. The evening ended with a musical recital by the Mystic Duo – Prashant Nawani and Sarvesh Wahie. Kunal, a postgraduate from Cardiff University is a seasoned master mariner. He always had an inclination towards writing. However, it was only in 2014, that he came up with his first poetry collection “Kuch Khwaab Sagar Se”. He received national and International recognition for his book which includes felicitation received by House of Life in France and by Nautical Institute, London. This was followed by his prose poetry ” Unanswered” which was released in International Film and Literature festival in 2015. He was felicitated at Seafarer choice Award in 2016 for this work. His next two poetry collections “Main Tula Hoon” & “Sparrow In the Mirror” has also received wide acclamation and appreciation. His work has been translated into multiple languages which include French, Italian, Spanish, Portuguese, Dutch and Urdu. So far he has published ten books in different languages. Apart from writing, Kunal is a theater enthusiast. “Journey to the Next Level” is his maiden fiction novel in English realeased in October 2018.

Garhwal Post has established itself as a credible, balanced and forward looking newspaper in India. Based in Uttarakhand, the daily is read by the aware, socially and culturally responsible, high-income elite of society.
Contact us: info@garhwalpost.in
bakersfield hookup sites