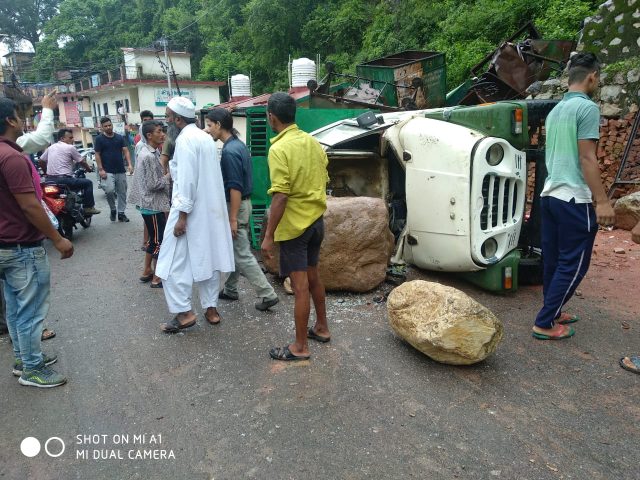 Rudraprayag, 30 Jul: Rain continues to wreak havoc in Rudraprayag. Owing to the day long rain, the Kedarnath Highway continued to get blocked near Bansbada, which greatly inconvenienced not just the local people, but also the pilgrims travelling to the holy shrine.
Boulders rained down on the bus stand near the District Headquarters, crushing a vehicle parked there. It was a stroke of luck there was nobody in it at the time. A JCB had to be deployed to remove the boulders.
The rain has been continuing with a few breaks for the last couple of days. The highway was blocked in Bansbada for as long as four hours on Tuesday. After the blockage was cleared, traffic resumed but the landslide continued. Traffic was diverted to an alternative route, which too got blocked after some time. Travelling on the roads here has become a dangerous activity for the people.

Garhwal Post has established itself as a credible, balanced and forward looking newspaper in India. Based in Uttarakhand, the daily is read by the aware, socially and culturally responsible, high-income elite of society.
Contact us: info@garhwalpost.in
find nearby hookups https://garhwalpost.in/ebony-dating-online/ flirt chile