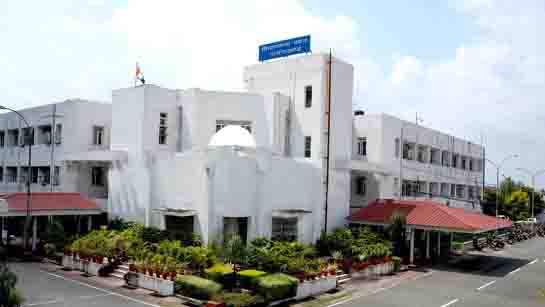 Dehradun, 31 Jul: The Dehradun district administration has issued evacuation notices to about 220 persons and government offices in respect of properties located along the banks of River Rispana. Of course, the notices have been issued in compliance with the orders of the Uttarakhand High Court, but the bigger question is whether the government would be able to demolish its own properties along the rivers Rispana and Bindal, which run through the state capital.
It may be recalled that included among the offices and government buildings located along the river bank are some of the most important government buildings in Dehradun like the Vidhan Sabha, Doordarshan and Akashvani Studios (Government of India building). However, the district administration has not dared to send notices regarding these two buildings, according to sources in the district administration.
The government offices that have been sent notices include the Raipur Police Station, Nehru Colony Police Station, NCC Complex, Uttarakhand Culture Directorate, BEO Office and Navodaya Vidyalaya, as well as the Polytechnic Institute near Nalapani Road.
Incidentally, some of the government buildings in Dehradun are dangerously located in the flood zones of various rivers like the State Mental Health Hospital, Doon University, Uttarakhand Technical University, etc. The trend of government offices and departments being offered land for construction started during the ND Tiwari Government and has continued till now! It is only after the Uttarakhand High Court took serious note of this that the district administration has started issuing evacuation notices now. It is funny to note that the High Court had issued a notice in this regard to the government and to the district administration several months ago, but the notice was brushed under the carpet and it is only now that the district administration has been forced to issue evacuation notices. Even more ironic is the fact that only 12 days period has been given under the notice to all concerned to evacuate, thereby inviting questions as to what the district administration was doing till now.It may be recalled that .last year, taking suo moto cognisance of a letter written by senior journalist Manmohan Lakhera, the Uttarakhand High Court had directed the state government to rid Dehradun of all encroachments. However, while the exercise had been initiated by the government to clear the city of encroachments along the roads, the government had sought a three year period for evacuating the slum colonies that have come up along the rivers Rispana, Bindal, Suswa and Tons, etc. Quoting multiple grounds and excuses, the government had called off midway the exercise to clear encroachments on the main roads of the city. Among the major areas that were cleared included the Premnagar Bazaar but since the road was not widened there ostensibly due to lack of funds, one can notice certain encroachments yet again in that area.
It remains a fact that the government never had the will to carry out such a mega exercise and therefore called off the operation on some pretexts. One year has passed since, but the government has not restarted its exercise so far, even as the possibility of earning the ire of the High Court looms large!
Meanwhile, those issued notices have been given such a short period to vacate the river banks that it is almost impossible for the district administration to ensure that the evacuations will really happen, sources admitted. Also, why certain government properties have not been issued notices is something none in the district administration wishes to explain. For example, if the notice is issued to Doordarshan, the Vidhan Sabha and Sanskriti Bhawan, where will these offices shift? The Vidhan Sabha can’t shift to just any other building in the city while the Doordarshan Buildings have satellite connections and state of the art studios. Adjacent to the Doordarshan building is an auditorium of the Culture Department (Sanskriti Bhawan) which is a very well equipped modern auditorium which has not even been inaugurated, as yet! Similarly, where will the Navodaya Vidyalaya, which is a residential school, shift all of a sudden? Where will the inmates of the mental hospital in Selaqui shift, if the building is to be evacuated and demolished? Though a large plot opposite the Maharana Pratap Sports College has been earmarked for the proposed Vidhan Sabha building, even the foundation stone has not been laid so far, probably, due to political reasons as no government wishes to indicate that Dehradun will become a permanent state capital. The Vidhan Sabha building besides being a state assembly building also houses the offices of the ministers. Also the district administration is confused with the stand of the state government in respect of the slum colonies like Deepnagar, Rajeev Nagar, Bangla Basti, Vir Gabbar Singh Basti, Azad Colony, Arya Nagar, Bhagat Singh Colony, and some colonies in Mothrowala which are located along the Rispana, while Vijay Colony, Nai Basti, Kanwali Road slum, Chandrashekhar Basti and Mehboob Nagar are located along the Bindal. Besides them, there are multiple such colonies which are totally illegal to begin with but are not recognised as slum colonies. There are thousands of houses and hutments in all these colonies but they are yet to be served notices by the district administration. It remains to be seen, if the government, which had claimed before the High Court that it would resettle the slum colonies within the next three years, starts its exercise. Or will it face the wrath of the High Court once again!