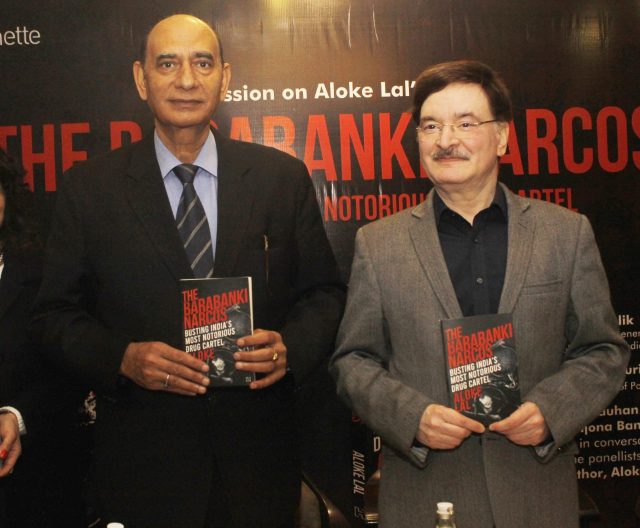 OPS Malik with author Aloke Lal at the discussion on his book ‘The Barabanki Narcos’ in Doon on Saturday. Pic: Vikram.

DEHRADUN, 7 Mar: At a discussion held on retired IPS Officer Aloke Lal’s recently launched book, ‘The Barabanki Narcos’, Chief Guest and retired IPS Officer OPS Malik said that there was a lot of demand for Police reforms in the country but that alone would not make a huge difference. The entire criminal justice required urgent reforms in order to make a significant change in the country. Though the Police force was the first respondent to a crime, the criminal justice system had other respondents too including the prosecution, the judiciary, the prison and the legislature. He also emphasised that India was perhaps the only country where the Police force was under the executive instead of being under the Law and Justice administration. Till the Police remained under the executive, better policing could not be expected. Aloke Lal’s book is a factual account of how the country’s most notorious drug cartel operating from Barabanki in UP was busted. Posted as SP in Barabanki, Lal has described how he managed to bust the cartel and the challenges he faced in doing so. Praising the book, Malik who had also held the charge of Director General, Narcotics Control Bureau of India said that it was a comprehensively written book which dwelt on every aspect of crime investigation and the district administration and it was amazing how Lal could use very unconventional methods to deal with and bust the drug cartel in Barabanki. Malik further added that it was highly praiseworthy that Lal could do this kind of work in his initial years of service and it showed his drive and zeal as a Police Officer and lead the force from the front. Lal read out a couple of passages from the book and narrated how he had to go scouring Lucknow’s red light area to nab a criminal on his wedding anniversary and what he had to undergo there. He also read out a passage accounting his meeting with a MLA who tried to influence upon him to suspend a police officer in the district for acting against certain criminals. The introduction to the book was given by Dr BK Joshi on behalf of Doon Library & Research Centre.