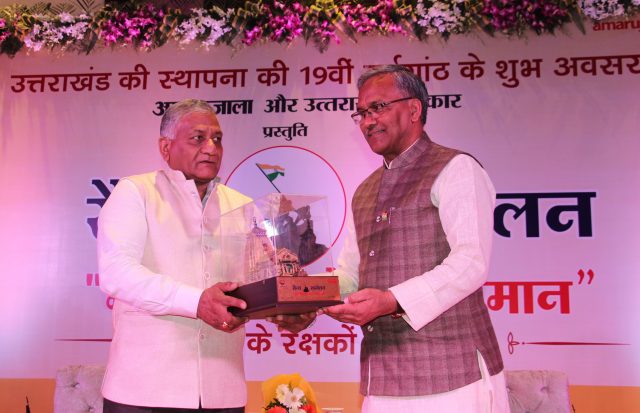 Dehradun, 4 Nov: Union Minister of State for Transport General VK Singh (Retd) today called upon the nation to respect its soldiers and defence veterans. He was speaking here on the occasion of a seminar on defence related issues hosted jointly by the state government and a leading Hindi daily, Amar Ujala. Singh asserted that a country where soldiers or the defence veterans were not respected could never make progress. He added that the morale of the soldiers ought to be boosted regularly and their spirit ought to be kept high for the sake of the nation’s welfare. 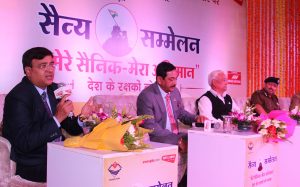 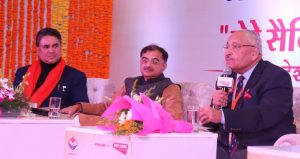 He further observed that Uttarakhand had produced soldiers of top merit and defence personnel of the state had won top medals for the defence services including the Victoria Cross. He also called upon the state government to make optimum utilisation of the ex-soldiers from the state as the state stood to gain much from this, adding that soldiers always mulled how to bring glory and fame to the country! Today’s seminar had four different sessions to discuss issues ranging from internal security issues and Uttarakhand’s contribution to the country’s security to the welfare of the retired defence personnel. In addition, a short play on the famed woman warrior of Uttarakhand, Tilu Rauteli was also staged. The play was directed by Laxmi Rawat from Delhi. The day concluded with recital of poetry of nationalist fervour by leading Hindi poet Kumar Vishwas. The fourth session of the day was about Uttarakhand’s contribution to the country’s security which was moderated by Garhwal Post editor and film actor Satish Sharma. The panellists were senior journalist and former Rajya Sabha MP Tarun Vijay and former President of Ex-Servicemen League Brigadier KG Behl (Retd). Tarun Vijay was asked by moderator Satish Sharma about his current campaign related to construction of war memorials in various educational institutions across the country and he disclosed that war memorials having photographs of 21 Param Vir Chakra awardees, the highest gallantry award, had been constructed in places as far as Arunachal Pradesh and Maharashtra and one had been constructed in Uttarakhand, too. In response to a question from Sharma, Vijay added that for people of Uttarakhand, patriotism was an essential part of their ethos and, for them, it was equivalent to spirituality and in Uttarakhand, patriotism was the dharma of the people. Observing that Uttarakhand had produced innumerable real life heroes from the defence services, Vijay suggested that schools in Uttarakhand ought to include knowledge in respect of the heroes from Uttarakhand in their curriculum. He asserted that to make the future of the state and the country brighter, it was necessary that the younger generation was told about the country’s heroes and martyrs. He also called upon the government to include mandatory military training in the schools and colleges of the state! Brig KG Behl said that Uttarakhand was a small state but it was home to leading institutes and institutions like IMA, Survey of India and Forest Research Institute. He also dwelt on the crucial role played by Survey of India and mapping the entire country with a very degree of accuracy and that these maps served the defence forces also very well. The Survey of India had also now incorporated latest mapping technology but even the new technology was validating the accuracy of the past maps. He also noted that people from Uttarakhand were serving on top posts in the country and making the state proud of them. The third session of the day was about the dignity and welfare of defence personnel after retirement. It was moderated by environmentalist and social activist Dr Anil P Joshi. The panellists were ex-Vice Chief of Army Lt Gen AS Lamba, MD UPNL Brigadier PPS Pahwa and Director UPNL Brigadier KB Chand. Joshi held the view that Uttarakhand could progress rapidly in various sectors including horticulture if the services of ex-soldiers belonging to the state were utilised properly. Lamba said that the biggest security challenge to the country was from China which needed to be taken very seriously. He listed terror sponsored by Pakistan as another major challenge but stressed that Pakistan was also a tool in the hands of China, which was a much bigger threat to the country’s security. Brigadier PPS Pahwa said that despite being a small state, Uttarakhand had a very high numbers of defence personnel and it was sad that when soldiers returned at age forty or around after putting in around 18 to 20 years of service in the armed forces, not all of them could be re-employed through UPNL. He added that more than 3,000 soldiers from Uttarakhand retired every year but the government was able to re-employ less than half of them. He suggested the government ought to reserve certain posts in the corporate sector too for ex-defence personnel. Unfortunately armed forces personnel retired at an early age and before being able to fulfil their family responsibilities. Brigadier KB Chand stressed on skilling the ex-defence personnel at government expenditure to ensure their employability post retirement. In the evening, leading Hindi poet Kumar Vishwas enthralled the audience with his poetry of nationalist fervour.

Garhwal Post has established itself as a credible, balanced and forward looking newspaper in India. Based in Uttarakhand, the daily is read by the aware, socially and culturally responsible, high-income elite of society.
Contact us: info@garhwalpost.in
https://garhwalpost.in/skyrim-date/