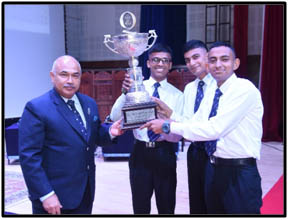 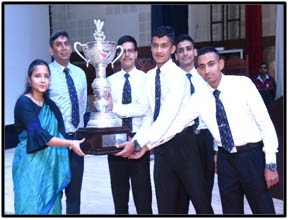 The event witnessed participation of 20 renowned schools from all over the country.

The All-India Inter-School Challenge Quiz was held on 22 September in which the host school emerged victorious. However, in keeping with the tradition that requires the host team to honour its best rival team if it wins the event, the trophy was presented to the runners-up team of RMS School, Ajmer. Present was Maj Gen Sanjeev Khatri, who appreciated the zeal of the students.

On 23 September, the RIMC campus glistened with fiery speeches from students of all participating teams. The finalists of the English Debates, namely St George’s College, Mussoorie, St Joseph’s Academy, Dehradun, Summer Valley School, Dehradun and the Rashtriya Indian Military College competed against each other over two motions – ‘This house believes that child is not the father of man’ and ‘This house believes that the strength of an individual is characterised more by their moral courage than their physical might’. After an illuminating discourse by the debaters in modified Cambridge format, St Joseph’s Academy bagged the fourth position, St George’s College clinched the third, Summer Valley School stood second and the host school emerged victorious once again. The Chief Guest on the occasion was Col Prem Prakash (Retd), an ex-commandant of RIMC. He gave away the prizes and certificates to the winning participants, and awarded the Hugh Catchpole Trophy to Summer Valley School.

On the final day of the event, the Kashi Naresh Debates were conducted in three rounds with six schools making it to the finals, namely Asian School, St Joseph’s Academy, RMS Ajmer, Wynberg Allen, Vasant Valley and RIMC. The Chief Guest was Nivedita Kukreti Kumar, DIG, Intelligence and Vigilance. The topics for the final were ‘Indian father is the richest man in the world’, ‘Human relationships are falling apart owing to today’s insensitive world’, ‘Women are more responsible when compared with men’, ‘It will be appropriate to stop the tradition of offering meals after death’, ‘Ganga-Jamuni culture is our only identity’ and ‘Impartiality is more important than nationalism for media’. After the valuable comments of the three judges, the chief guest gave away the prizes to the budding debaters. Wynberg Allen School, Mussoorie bagged the third position, while Vasant Valley, Delhi finished second best. Making everyone proud for the third time in three consecutive days, RIMC won the Kashi Naresh Trophy and presented it to the runners up team.

RIMC won the Overall Festilit 2022 Trophy. Col Vikram Kadian, Commandant, RIMC, proposed the vote of thanks and addressed the gathering.