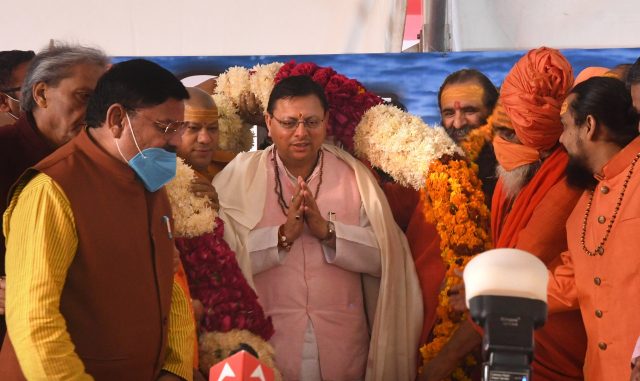 DEHRADUN, 5 Dec: Chief Minister Pushkar Singh Dhami visited the Niranjani Akhara in Haridwar today, where representatives of various Akharas led by President of Akhil Bharatiya Akhara Parishad and Secretary of Niranjani Akhara, felicitated him and handed him a shawl, an emblem and Gangajali. The seers on this occasion also thanked him for abolition of recently constituted Uttarakhand Devasthanam Board. Among the seers present on this occasion were Mahant Ravindrapuri, President of Akhil Bharatiya Akhara Parishad, and National General Secretary of Akhara Parishad Mahant Harigiri, Jagatguru Rajarajeshwara Ashram, Niranjan Akhara Chief Kailashanand Giri, Peethadhishwar of Anand Peeth Balkananda Giri, Mahamandaleshwar of Juna Akhara Prem Giri, Mahant Satya Giri of Awaahan Akhara, Mahant Bhagatram of New Udaseen Akhara, Lalitanand Giri and Narayan Giri. While addressing the function, Chief Minister Pushkar Singh Dhami announced installation of a trident at Juna Akhara, beautification of Dukh Haran Temple and the Juna Akhara Ghat in view of the strong faith of the people in these places. Referring to the Devasthanam Board, the Chief Minister said that there was a demand to withdraw or bring changes in the Devasthanam Board by various Teerth Purohits, other stake holders as well as many seers and religious organisations. Respecting the sentiment, a committee was constituted under the leadership of Manohar Kant Dhyani by the Government which submitted its report to the government and then a Cabinet sub-committee also submitted its report recommending dissolution. Dhami said that the government was pro people and it believed in taking the decisions in accordance with the feelings of the people. He said that this was the spirit of the revered seers. He said that at this point of time, in the interest of all, he decided to withdraw the Devasthanam Board, as the Chief Sevak of the state. Chief Minister Pushkar Singh Dhami said that when the state would be celebrating silver jubilee of its formation, it would be among the leading states of the country in every field. For this, the government was inviting views of the experts and also preparing a roadmap for the next 10 years. The Chief Minister reminded that over 500 decisions had been taken in the last five months and the orders for implementation of the decisions were being issued immediately to ensure timely implementation. He said that Prime Minister Narendra Modi laid the foundation stone and inaugurated various schemes worth Rs 18,000 crores for the all-round development of Uttarakhand. On this occasion, Cabinet Minister Swami Yatishwaranand, Kichha MLA Rajesh Shukla, former MP Balraj Pasi, District President BJP Dr Jaipal Singh, District General Secretary BJP Vikas Tiwari, Ganga Sabha President Pradeep Jha, General Secretary Tanmay Vashisht were amongst those present.