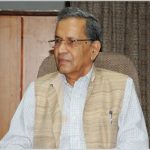 By Prof AN Purohit

Talks, discussions and news all around about Corona virus for the last more than 5 months are mind blowing. At present, “corona pandemic” seems to be more due to “the infodemic”. Its treatment is possible only through “wisdemic”. Therefore, it compels everyone to ask what this corona virus is all about. From where and why did it come? How long will it stay on this earth to harm other living beings? What is good and what is evil about it? The scientific narrative of cosmic evolution demands that we tackle such big questions with a cosmological perspective.

This virus like others is certainly a part of Nature, because it exists. At this point let me start with nature of Nature (with capital letter). Nature has different meanings in different cultures. The Indian traditions identify Earth, and all other bodies in the space separately. Nature is considered as creative (Universe) and Earth and other bodies in the space are created. Nature is governed by universal laws but Earth as well as other bodies are dynamic and influenced by various factors from time to time. Life, on the other hand, is a process not a substance. However, both are difficult to be defined in precise and simple terms. It is in this connection I spend some of my time during this Lockdown to go though some literature on viruses, their origin and Nature as perceived in philosophy.

John Stuart Mill (1874) stated that the nature of any given thing is the aggregate of its powers and properties, whereas Nature (with capital N) is the aggregate of the powers and properties of all existing as well as possible-to-exist things. Nature means the sum of all phenomena, together with the causes which produce them; including not only all that happens, but all that is capable of happening; the unused capabilities of causes being as much a part of the idea of Nature as those which take effect .

In nature, everything has a purpose to exist but what could be the purpose of viruses?
There are several philosophical thoughts on the origin of life on this earth but nothing to my knowledge on the link between the living and non-living. Although the origin of life is still a mystery but probably the concept proposed by Moelling and Broecker (2019) “viroids-first” seems to be the most likely scenario for the emergence of life on Earth. Therefore, probably we can designate them as “Super particles” and could be like soul (Atma) of life. Neither can these be created, nor can these be destroyed. These only can be converted from one form to another. The definition of soul (Atma) given in Bhagwat Gita, “(nainaṃ chindanti śastrāṇi nainaṃ dahati pāvakaḥ। na cainaṃ kledayantyāpo na śoṣayati mārutaḥ॥ 2-23)’’, which says that “weapons do not cleave it, fire does not burn it, waters do not wet it, and wind does not dry’’ is the most befitting to viruses. These are probably the beginning of life-forms on the earth, as also suggested recently by Roossinck.

Although, more recently, physics has proved that the smallest particle is God particle, this Higgs boson elementary particle (can be speculated as Deva-anu). In Sanskrit literature, Parmanu (particles), are the smallest units of matter. Once these aggregate, these become Anu (molecules). In unorganised form, these are nonliving and harmful to Jeev (living organisms) are called as Bishanu (viruses) and those which are organised but larger than Bishanu, submicroscopic which cannot seen with naked eyes but larger than Parmanu, are called Jeevanu (microbes).

Nature has designed biological progressive evolution. However, recent upsurge in social evolution / revolution in the name of desirable development has created environmental and biotic crises which might lead to sudden retrogressive evolution and major change in pupation of human species world over. It seems that Malthus’ theory seems to be correct. In one of my booklets, “The Murmuring Man”, published in 1995, I had mentioned that, if not taken care of, nature would be looked after by an “Auto repair” system already present in nature as an alternative measure to keep balance in nature and development. The biotic crisis overtaking our planet is likely to precipitate a major extinction of species as proposed by Myers and Knoll in 2001. Not so well known but probably more significant in the long term is that the crisis will surely disrupt and deplete certain basic processes of evolution, with consequences likely to persist for millions of years. Distinctive features of future evolution could include a homogenisation of biotas, a proliferation of opportunistic species, a pest-and-weed ecology, an outburst of speciation among taxa that prosper in human-dominated ecosystems, a decline of biodisparity, an end to the speciation of large vertebrates, the depletion of ‘‘evolutionary powerhouses’’ in the tropics, and unpredictable emergent novelties. Despite this likelihood, we have only a rudimentary understanding of how we are altering the evolutionary future. As a result of our ignorance, conservation policies fail to reflect long term evolutionary aspects of biodiversity loss. What we see before us is the result of “struggle of opposites”.

The evolution of humans seems to be the climax in progressive evolution. It is well known that one of the major roles of viruses is to create selection pressure in nature. After seeing the havoc created by COVID-19 the world over, a metaphysical idea comes to mind that probably a process of retrogressive evolution has started or at least a signal for such process is there. We, the human beings, are being forced to think about the social revolution in the name of development / modernisation brought about by us through the social evolution / revolutions in our society having also reached the last limit. I think it is a signal for us to reorient our approach to development. Remain united as we were as inhabitants of one earth rather than feeling proud to be identified as American / European / Asian / Chinese / Russian so on and so forth. The concept of caste, creed and citizenship has become meaningless after the havoc created by this one virus disease. The process of biological evolution must be protected from the social revolution.