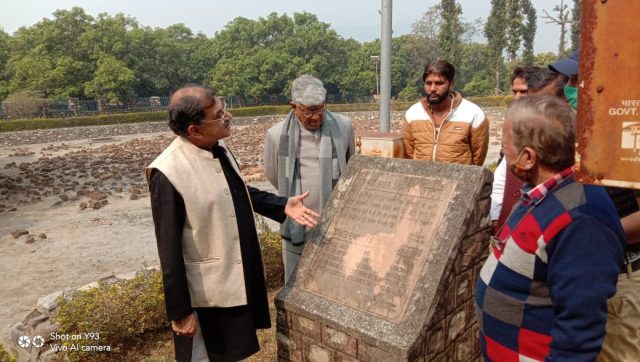 Dehradun, 14 Feb: A 1700 year old Sanskrit inscription in Brahmi script has been discovered at the Jagat Gram archaeological site.
Former MP Tarun Vijay is leading the rejuvenation of this 3rd century Ashwamedh Yagya site. The Archaeological Survey of India has begun work with great success. Vijay has thanked DG, ASI, Vidyavathi for sanctioning new facilities like an interpretation centre at the site.
The BJP leader has urged CM Trivendra Singh to order speedy completion of the access road. He described as unfortunate that there is no access to this world class Hindu wonder, which needs state protection and a fibre glass canopy to protect the yagya vedi bricks.
Tarun Vijay has been working relentlessly to revive this rare monument of Uttarakhand.
Today, during his visit, ASI officials were pleased to show him a newly discovered brick of 3rd C with Sanskrit inscriptions in Brahmi script. Tarun Vijay said this revealed that a lot is yet to be rediscovered and proper excavation should be ordered, especially to find the fourth Ashwamedha site as is described in inscriptions preserved in New Delhi with ASI.