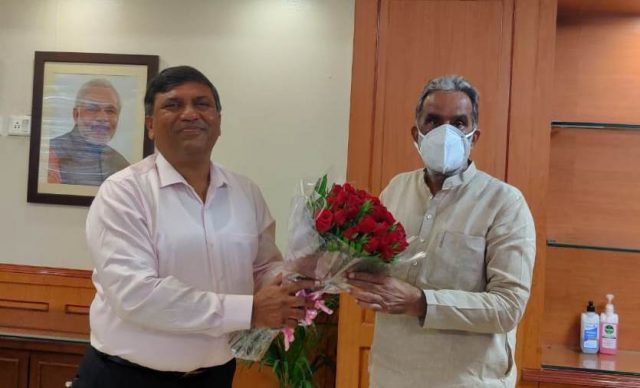 By Our Staff Reporter
Rishikesh, 15 Jul: RK Vishnoi, Director (Technical), THDC India Limited (THDCIL), called on Krishan Pal, Minister of State for Power & Heavy Industries, in New Delhi, today. Vishnoi extended his best wishes to the MoS on his recent new responsibility in the Ministry of Power.
Vishnoi briefed the MoS on the overall activities of the corporation including operation of the prestigious Tehri Power Plant and Koteshwar Dam, as well as about the progress made in the construction of theTehri Pump Storage Plant (PSP) 1000MW and VishnugadPipalkoti Hydro Electric Project (VPHEP) 444MW.
He also spoke about the progress made in construction of the 1320 MW Khurja Super Thermal Power Project as well as the initiatives taken on floating Solar Power Projects, Wind Power Projects and Small Hydro Projects.
The MoS appreciated the overall functioning of THDCIL and promised all possible support to the Corporation in terms its business expansion and growth.
Today, THDCIL is one of the premier power generators in the country with installed capacity of 1587 MW with commissioning of Tehri Dam & HPP (1000MW), Koteshwar HEP (400MW) in Uttarakhand, Wind Power Projects of 50MW at Patan & 63MW at Dwarka in Gujarat, 24MW Dhukwan Small Hydro Project, Jhansi, Uttar Pradesh and 50 MW Solar Power Project at Kasaragod, Kerala to its credit.

Garhwal Post has established itself as a credible, balanced and forward looking newspaper in India. Based in Uttarakhand, the daily is read by the aware, socially and culturally responsible, high-income elite of society.
Contact us: info@garhwalpost.in
https://garhwalpost.in/love-island-usa-casting/ https://garhwalpost.in/best-transgender-dating-apps-2022/