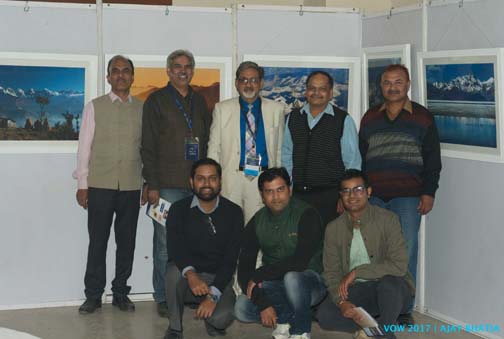 Dehradun, 18 Nov: The Second Edition of the Valley of Words (VOW) is being organised from 23-25 November in Dehradun. VoW celebrates creative expressions across all genres: poetry, philately, ballads, conversations, discussions, visual arts, music and much more.

VoW also engages in outreach activities to institutions in Doon to involve the next generation in its activities. Photography is one such avenue where it looks forward to connecting with the leading and emerging photographers. In the first edition, it received entries from 10 leading photographers of the country and it was a great success.

The second edition of VoW is coming up with a new updated and upgraded version of the photography exhibition. “The Third Eye” VoW has solicited images from the leading photographers of the country and even abroad who can showcase the beauty of Himalayan landscapes, its culture, flora & fauna. Viewers can enjoy the marvellous photos being curated by Avinash Chandra Joshi and Mr. Bhumesh Bharti for Valley of Words.

The ice sheet in Antarctica originated perhaps more than 50 million years ago and acts as an extremely well preserved repository of all things falling on it and buried in it, such as fragments of cosmic bodies, nuclear product cosmic rays and samples of entrapped air and minerals. The first sighting of Antarctica was done by Nathaniel Palmer in 1820. The earliest known photographs of Antarctica were taken during BELGICA (1897-99) expedition. The heroic era of Antarctic exploration is considered till 1935 (Byrd II expedition). The seventh continent of the world is a demilitarised and nuclear free zone and offers freedom for research.

The first Indian to visit Antarctica was Dr Giriraj Singh Sirohi in 1960-61. He conducted unique experiments related to the Biological Clock at South Pole. To honour his contributions, the US Board on Geographic Names named a point in Antarctica ‘Sirohi Point’ in 1966. Dr Paramjit Singh Sehra was the first Indian to winter over in Antarctica with the 17th Soviet Antarctic Expedition (1971-73). The first Indian expedition to Antarctica was sent in 1981. Since then, India is continuously sending expeditions to the icy continent. The first permanent station “Dakshin Gangotri” was established in 1983 on the Prince Astrid ice shelf. “Maitri” was built during 1988-89 while the third station “Bharati” became operational in 2012 at Larsemann Hills, East Antarctica.

During the seventh Indian expedition, a post office was established at “Dakshin Gangotri” under the aegis of North Goa postal division, Goa-Panaji region, Maharashtra circle with pin code 403001. The first letter was posted on 26 January 1988 on Republic Day. Postal mails from Antarctica are very special as they cover approximately 25000 Kms to and from and go through various mode of transports viz. ship, helicopter, airplane and railways.

In August, 1947, when independence was granted to the former imperial domain of British India, it was partitioned into two countries – India and Pakistan. The largest mass migration that followed saw the death and displacement of millions of people.

The Partition Museum, set up under the aegis of The Arts and Cultural Heritage Trust (TAACHT), in Amritsar, tells the story of Partition using first-hand accounts of those who witnessed the event. Despite the extensive loss to life and property, 70 years later no museum or memorial existed anywhere in the world to remember the millions who were affected. The Partition Museum opened all its galleries to the public on Partition Remembrance Day on 17 August 2017 and has since become one of the most visited destinations in Amritsar.

Set up as an interactive, immersive museum, the current display houses oral histories, physical objects that people brought with them when they migrated, newspapers, maps, photographs and much more. The exhibition at Valley of Words 2018 will give audiences a glimpse into this collection and the stories that are showcased in the museum galleries.

Garhwal Post has established itself as a credible, balanced and forward looking newspaper in India. Based in Uttarakhand, the daily is read by the aware, socially and culturally responsible, high-income elite of society.
Contact us: info@garhwalpost.in
arkansas hookup popular lgbtq dating app gay for pay men