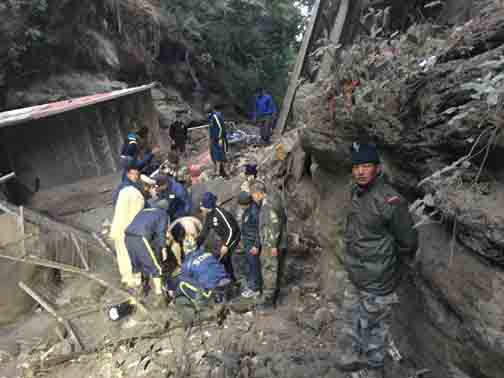 By OUR STAFF REPORTER
DEHRADUN, 28 Dec: The 115 year old bridge connecting Garhi Cantt with Birpur collapsed at about 5.10 a.m., today, when an overloaded dumper attempted to cross it. As a result, two motorcycles also fell into the Tons River.
The Gorkha Battalion stationed at Birpur was the first to respond. Soldiers immediately organised a rescue operation and contacted the local authorities. They rescued three persons who were grievously injured and got them admitted to a civil hospital. The bodies of two individuals found dead were recovered by the SDRF team in the presence of police. Three others have received serious injuries. They have been admitted to Synergy Hospital.
According to Kotwali Cantt Inspector Arun Saini, the dead have been identified as Dhan Bahadur Thapa, resident of Banganga, and Prem Thapa, resident of Dhakra Cantt. The injured are Shahrukh, Zulfan of Vikasnagar, and one who has not yet been identified.
It may be recalled that the foundation stone of a new bridge had been laid by the Chief Minister some days ago and work was to begin in a couple of days. The steel bridge that collapsed was in poor condition and the people had been demanding a new one for long. They had also demanded a low barrier to be set up at the bridge to prevent heavy vehicles from plying on it. The bridge was just two kilometres from the CM’s official residence and was on the route to Santla Devi Temple, Janatwala, Banganga, Kandli, Jamunwala, Jhaduwala, etc. Even so, it was not properly maintained.
According to Mussoorie MLA Joshi, approval for a new bridge had been received quite some time ago, but clearance was not given by the Army authorities for over a year, leading to the tragic delay.

Garhwal Post has established itself as a credible, balanced and forward looking newspaper in India. Based in Uttarakhand, the daily is read by the aware, socially and culturally responsible, high-income elite of society.
Contact us: info@garhwalpost.in
https://garhwalpost.in/free-online-dating-site/ 50 dating