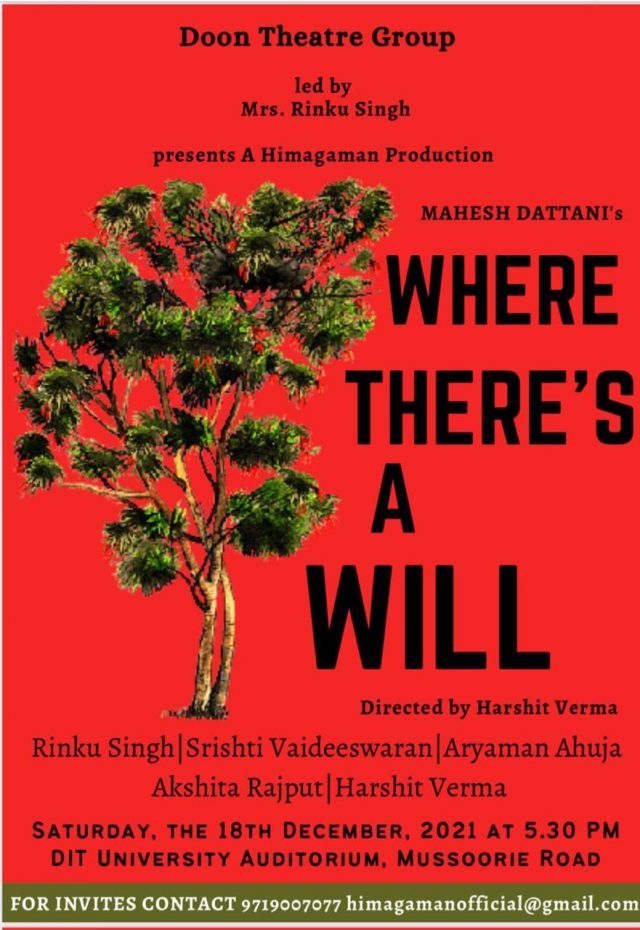 DEHRADUN, 13 Dec: Doon’s upcoming Theatre Group, Abhinaya, led by Rinku Singh, resident of Antara, will stage a play, “Where There’s A Will….” written by Mahesh Dattani, directed by Harshit Verma of Himagaman Productions. The new theatre group aims to stage plays with a purpose to entertain the masses by raising social and moral issues pertinent to society, and to inculcate a culture of Theatre. It is important for the youth to learn about different forms of art and take theatre not only as a getaway in the form of a hobby but also a career option.
Rinku Singh, President of the Group, having gone around the world with her diplomat husband and experiencing diverse cultures, eventually settled down in the foothills of Mussoorie and decided to express her creative self through the medium of theatre. She is an artist and art collector, a choreographer and cultural events organiser.
The play being directed by Harshit Verma is being presented by Himagaman Productions. The team, comprising him and Shubham Dhiman, filmmaker and writer, is set to bring many new productions, including a documentary series that has already been released in PVR Dehradun.
The play will be staged on 18 December at 5:30 p.m. in the DIT Auditorium. It has been written by the famous modern Indian playwright, Mahesh Dattani. It is about a ruthless patriarch, dominating his son, wife and daughter-in-law throughout his life. It seems to be an ordinary Indian family till the patriarch, Hasmukh, suddenly dies, leaving the family distraught. As the play continues we see how the money and property divides the family, pitting them against each other, only to realise their selfishness by the entry of a strange new woman, claiming to be the owner of their house. The script manages to maintain its light-heartedness and humour through all character dialogues.
Starring Srishti Vaideeswaran, Aryaman Ahuja, Akshita Rajput, returning to theatre from being a famous child actor, Harshit Verma and Rinku Singh, the play is bound to be loved by the audience.