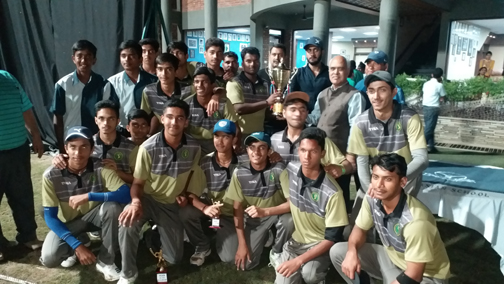 By OUR STAFF REPORTER
Dehradun, 17 Apr: The Abhimanyu Cricket Ground snuggled in the lush Guniyal Gaon was the venue for the Sardarni Kawaljeet Kaur Juneja Staff Vs Students Cup. The Day-Night Match commenced with the students winning the toss and electing to bat first.
The students eleven began their innings with the opening duo of Dev Yadav and Aryan Dhulia. They lost their first wicket with Dev Yadav falling prey to some fine bowling by Gautam Taneja.
The students’ innings came to an end in the stipulated 20 overs but not without giving a target of 168 runs to the staff.
The teachers eleven began their innings with the opening duo of Rakesh Kumar and Bhriguraj Pathania, who displaying characteristic finesse played some great shots. The loss of two wickets in quick succession made the match a nail-biting one and the staff soon floundered and lost the match by 8 runs.
Gaganjot Juneja and Chand Babu took two wickets, each.
Vishwas Gulati took 4 wickets and was declared Man of the Match.
Anmol Shah took 3 wickets and was declared the Best Bowler. Aryan Dhulia (48 runs) put up a wonderful partnership with Chand Babu and was declared the Best Batsman. The winners received their trophy from Principal AK Das and AVD Thapliyal, Vice Principal.
The match was attended by Vice President Madanjeet Singh, Geeta Das, Head, Middle School, Mukesh Nangia, Head Mistress Kalpana Grover and the Staff and Students of The Asian School.