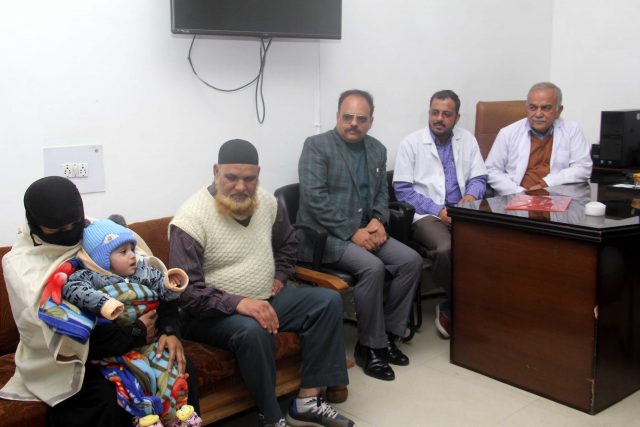 DEHRADUN, 13 Dec: The Paediatric Surgeon of Shri Mahant Indiresh Hospital, Dr Madhukar Maletha, and his team have carried out successful surgery of a one year old baby by constructing his food pipe. The baby was born without any food pipe. After the birth, when the first time the mother fed the baby with milk, the baby failed to take it. The initial investigation revealed the baby had the inborn defect of being born without the food pipe. Ordinarily, such food pipe related problems are diagnosed in one out of 3,500 babies. As many as 150 such cases have been operated on at Shri Mahant Indiresh Hospital till now. But this case was the ‘rarest of the rare’. In such cases, the operation is carried out in two phases. In the past also, two such cases have been operated upon successfully at Shri Mahant Indiresh Hospital. Zaid, a one year old baby boy, son of Aayat and Afsana, a resident of Azad Colony, here, did not have a food pipe since birth. In Medical Science, this disease is called ‘Pure- Esopahgeal Atresia’. After the birth, the first operation of the baby was carried out termed as ‘Feeding Gastrosstomy with Cervical Esophagostomy’. Under this operation, a kind of base was to be formed to make the food pipe of the baby. After one year of the birth, one more major operation was to be carried out on the baby. This operation was extremely complicated and challenging. It was a tough task to protect the baby from infection. The second operation of the baby, termed as Gastric Transposition, was conducted on 23 November. The operation lasted 6 hours. In this operation, a food pipe was made by the doctors from the throat to the stomach. After this successful operation, the baby is able to feed through the mouth and is healthy. He has been discharged from the hospital. This complicated operation was done successfully by Dr Madhukar Maletha and his team comprising Dr Archana, Dr Pritish and Dr Tejaswini from Anaesthesia, Dr Utkarsh Sharma, Dr Ragini Singh, Staff Nurses Ratna and Priyanka. “In some babies, the food pipe is only half developed. This case was extremely complicated. The food pipe was made right from the throat till the stomach of the baby. For one year, extreme attention was paid by the parents and grandparents of the baby in his upbringing. This was the reason that the baby didn’t catch any infection in the first year of his life. We congratulate the parents and grandparents of the baby who cared for the child so well that played a key role in saving the life of the baby,” said Dr Madhukar Maletha.