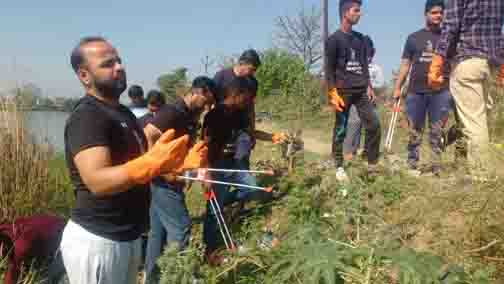 By OUR STAFF REPORTER
Haridwar, 21 Apr: The youth team of ‘Being Bhagirath’ undertook a clean-up campaign at the ‘Selfie Point’ near Govind Ghat, here, today. Enthusiastic members of the team gathered at the Ghat and communicated a message of cleanliness by clearing the garbage in the area.
Convenor of ‘Being Bhagirath’, Shikhar Paliwal said that they covered a considerable area and cleared the undeclared dumping ground at the site, turning it into a ‘selfie point’. He emphasised that the Ganga could be made pollution free through raising awareness.
The organisation undertakes a clean-up every Sunday at the Ghats. The activists also urged the government and administration to pay greater emphasis on keeping the river banks clean. The cooperation the general public would prove useful in the task. It was also slated that the social media was also being used to spread the message on cleanliness. Vardha Chandwani and Utsav said that the efforts of the youths were praiseworthy. Everybody ought to give some time to the service of the Ganga. The general public ought not to throw polythene, waste and other plastic material at the ghats. Visiting pilgrims also needed to be made aware.
The clean-up continued for several hours and assistance was provided by the local residents.
Among those present were Jitendra Chauhan, Raghav Sharma, Anupam Chaudhary, Mohit Vishnoi, Tanmay Joshi, Rishu Walia, Rohit Sharma, Dheeraj Bhutani, Sanjay, Abhishek Thakur, Shubham, Vishal Nankani, Tanmay Sharma, Rudraksh, Aditya Bhatia, Manu, Deepak Mishra, Sagar Jha, Vipul Goyal, Jasnadeep, Shivam Ghosh, Sonu, Chandrashekhar Chaudhary, etc.