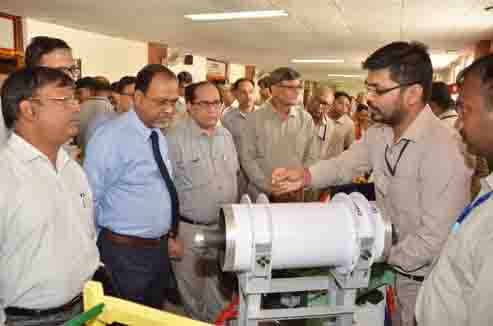 Haridwar, 26 Apr: Upholding the approach of continuous improvement through business excellence, the 29th Annual Quality Circle Summit was held today at BHEL, Haridwar. The one-day summit was inaugurated by Kamalesh Das, Director (E, R&D), BHEL, followed by a grand opening ceremony at the Golden Jubilee Hall. Das emphasised that the quality in business of organisation would rise only if the employees would concentrate on improving and reinventing themselves. Quality Circle teams of 15 units of BHEL across the country have come down to Haridwar to participate in this top convention.
Present on the occasion was Executive Director (COM), BHEL, C Murthy, who also read out the message from the CMD, BHEL, Atul Sobti. Sobti congratulated BHEL, Haridwar, for hosting the convention and emphasised on devoting heart and soul to improving quality for the organisation to sail through tough times.
Sanjay Gulati, General Manager, Incharge, (HEEP), BHEL Haridwar, said it was a great honour for the unit to be hosting a symposium on such a scale, which would bring out the innovation and talent across the organisation. He said it was a matter of pride for that the dedicated and competent employees were continuously bringing laurels for the company through the forum of quality circles.
In the evening, a colourful cultural programme was organised at the convention centre, followed by a valedictory session. A total of 48 quality circle teams participated from 15 units of BHEL spread across the country. Executive Director (COM), BHEL, C Murthy and General Manager Incharge (HEEP) Sanjay Gulati presented the awards to the winners in various categories. NK Manwani, AGM & Head (Quality), BHEL Haridwar, welcomed the guests while AK Sarkar, General Manager (Corp Quality) proposed the vote of thanks. JP Singh, General Manager Incharge (CFFP), various other GMs, senior officials of BHEL, representatives of unions and associations and departmental employees were also present on the occasion.