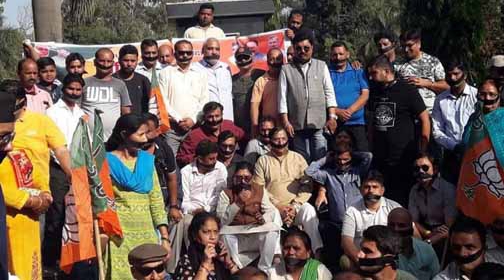 By OUR STAFF REPORTER
Dehradun, 15 May: Activists of the BJP today took out a silent rally, here, to express their angst at the alleged attack on Party President Amit Shah’s road show by the Trinamool Congress in Kolkata. The rally began from the City Office and concluded at the Gandhi Park. The protestors had black cloth wrapped around their mouths.
They also staged a silent dharna at the statue of Mahatma Gandhi. After the protest, State General Secretary Naresh Bansal said that anarchy was at its extreme in Bengal and democracy was in danger. The Chief Minister, herself, was directing the police to indulge in anti-social acts. Political workers were being killed on a daily basis. This had gone to the extent that the President of the world’s largest political party could not hold a road show in Kolkata. He disclosed that similar protests were held in every capital city in the country, today. The BJP workers were angry about their president having come under attack and had decided to register their protest in a peaceful manner.
Those present on the occasion were State Vice President Jyoti Prasad Gairola, Mayor Sunil Uniyal ‘Gama’, MLA Pushkar Singh Dhami, Secretary Kailash Pant, State Media in-charge Dr Devendra Bhasin, Rajeev Uniyal, Rajendra Dhillon, Aditya Chauhan, Shyam Pant, Brijelesh Gupta and many others.

Garhwal Post has established itself as a credible, balanced and forward looking newspaper in India. Based in Uttarakhand, the daily is read by the aware, socially and culturally responsible, high-income elite of society.
Contact us: info@garhwalpost.in
best dating app 2022