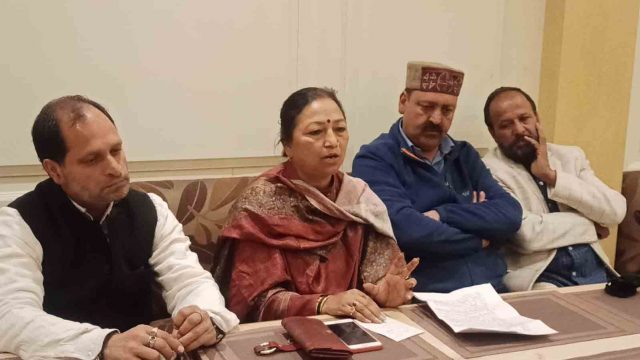 By Sunil Sonker
Mussoorie, 8 Nov: Uttarakhand Congress General Secretary Godavari Thapli, while talking to the press here, today, accused the BJP government of the state and Cabinet Minister Ganesh Joshi, the local MLA, of taking credit for the schemes instituted by the previous Congress government.
Thapli said that in view of the elections, the BJP government was hurriedly launching half-completed schemes. Work on schemes such as the parking in Mussoorie, drinking water scheme, auditorium had not been completed, yet, but these were being dedicated to the public. This would be opposed by the Congress. She alleged that no work had been done by BJP MLA Ganesh Joshi for the development of Mussoorie during his tenure but the report card presented by him would be fake. The BJP government had completely failed. Inflation, corruption and unemployment had broken the back of the people. The result was seen in the Himachal Pradesh bypolls. She claimed that the people of Uttarakhand had made up their mind to teach the BJP a lesson. The Congress would form the next government.
Present on this occasion were former Mandi Parishad President Upendra Thapli, Megh Singh Kandari, former Cantonment Board Vice President Mahesh Chandra, former Mussoorie Congress President Satish Dhoundiyal and others.